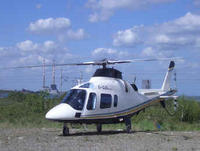 Now that was interesting. I had brought along a letter of complaint to give to the pilot of Bernard McNamara's helicopter (EI DJO) which insists on landing next to Booterstown Bird marsh and annoying the birds and nearby residents.

However I didn't really want a haircut so I stayed away from the rotating blades and took a snap instead.

Happily Frank Miller a photographer was out taking photographs of the birdlife nearby, and he took some pix of me taking photos which made for a good story the next day in the Irish Times.

Hopefully some enforcement action will result.

Posted by Ciarán at 2:07 pm No comments:

Donnelly Gallery on the Vico Road 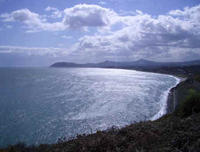 And that view is one of the reasons why people want to live on the Vico Road between Dalkey and Killiney.

Incidentally why not plan ahead for a visit to the Donnelly Gallery, just off the Vico Road. Its inaccessibility to the public is a matter of some controversy, but I'm delighted to say that you can apply to visit by calling Penny Grey the Administrator on 676 8200

Every effort will be made to ensure that visitors to the Gallery have a rewarding and memorable experience. (Or so I'm told)

Posted by Ciarán at 2:06 pm No comments:

Good to have you back Kunle! 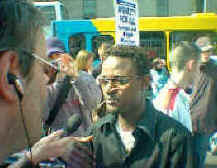 Olunkunle Eluhanla made a brief appearance at the Residents against Racism rally on O'Connell Street last Saturday 2nd April 2005. Here's my press statements on the issue
I made a comparison between Martin Luther King's 'Red Hills of Georgia' Speech and the Green Hills of Ireland, hoping that 'little black boys and black girls will be able to join hands with little white boys and white girls as sisters and brothers' ... without fear of being deported with no notice.
There was a crowd of around 300 people, with many parts of the country and the world represented.
Posted by Ciarán at 1:42 pm No comments: