Climate Change: Hope is back 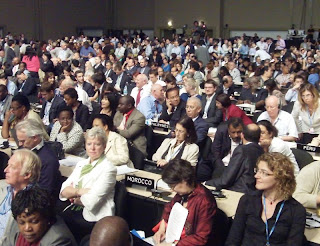 That's the main outcome from the Cancun Climate Change Conference here in Mexico.

Expectations couldn't have been lower. After last year’s failure at the climate talks in Copenhagen no-one expected a miracle at this year’s meeting under the UNFCCC. However early this morning the near-impossible happened. 191 countries signed off on texts relating to the Kyoto Protocol and Long-Term Co-operative Action. It doesn’t save the Planet, but it does save the process.

The United Nations Framework Convention on Climate Change (UNFCCC) has been around for over a decade at this stage, and there’s now renewed hope that next year’s meeting in South Africa will produce a legally binding international agreement. In essence it’s an incremental but significant step forward.

Last year many countries said no to a deal because the deal went too far. This year one country, Bolivia opted out of the consensus saying that the proposals weren’t strong enough. I agree with the essence of what Bolivia was saying – we need to go further and faster to tackle greenhouse gas emissions, but a failure to achieve something in Cancun would have been disastrous, as many countries might simply have walked away from the negotiations process. The texts refer to keeping global temperature increases to less than 2 degrees Celsius, and to consider moving the goal to a more ambitious limit of less than 1.5 degrees. That may not sound like much, but these are global average temperatures, and may lead to more dramatic rises in certain countries, and in increased likelihood of more extreme weather events. Even minor climate changes can wipe out the crops and livelihood of some countries. A small rise in ocean levels could swamp much of the territory and many coastal and island States.

The European Union’s (EU) Climate Change Commissioner Connie Hedegaard from Denmark along with the current Flemish Chair of the EU Environment Council Joke Schauvliege led the co-ordination meetings for the Union that took place at crucial points in the negotiations. All countries addressed the floor and I was privileged to speak for Ireland. Even within the European camp there are divergences of opinion, but Europe is taking a lead in proposing 20% reductions in emissions by 2020, and a 30% target if other countries are willing to move.

There’s a key fault-line between developed and developing countries. Put simply, the less developed countries rightly point out that the richer countries caused the bulk of the problem, and the poorer countries are suffering the consequences. For this reason a Green Climate Fund is being set up to provide assistance to the more vulnerable countries. Framing the institutional architecture of this fund is quite a challenge. The World Bank will serve as trustee to the fund for the first three years, and the composition of the Fund’s committee is carefully balanced across the continents, and ensures that small island states are represented. The Fund will assist countries in adaptation to climate change and will have access significant funding over the next decade. However Irish delegate Pat Finnegan from the environmental Non-Governmental Organisation Grian points out that increasing capacity building in the countries that receive this funding is a crucial issue that hasn’t been resolved.

In the short term, Ireland along with other European countries is providing fast-start financing for the most vulnerable developing countries, and we’ve announced a commitment of €23 million as Ireland’s contribution for 2010. Some might argue that such money shouldn’t go abroad at a time of economic austerity at home, but the funding will help some of the most impoverished nations to adapt to a crisis for which we share responsibility.

Tensions ran high in the hall last night, and there were standing ovations for the Mexican Foreign Minister Patricia Espinosa who chaired the conference for her role in both leading and listening as part of the delicate diplomacy that unfolded. It was a successful conference for girl-power as well. Former Irish President Mary Robinson addressed Climate Justice side-event earlier in the week, and I have no doubt that the listening skills of European Commissioner Hedegaard, Minister Schauvliege and others contributed to the progress that was made.

Late on Friday evening Mohamed Aslam, the environment minister of low-lying Maldives addressed the floor: “I speak for a country whose survival depends on the decisions we take. No one can doubt my interest in this matter. The text is the best we can do right now and there is room to improve things next year."

I couldn’t have put it better myself.
Posted by Ciarán at 11:13 am No comments:

And now the weather 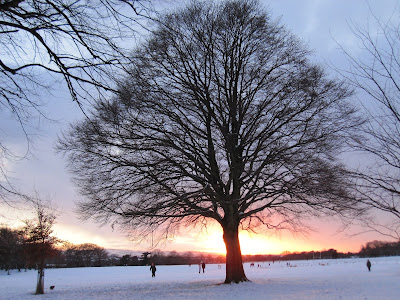 It has been a tough month. The arrival of the IMF has changed everything. That’s why we decided a fortnight ago that an election is required at the first opportunity. Before that happens we want to approve a budget and the accompanying legislation that allows it to be implemented. Governing requires the making of decisions, and tough ones at that. Currently we’re borrowing two out of every five euro that we pay public servants in wages, and that has to change. The €85 billion in monies from the EU and the IMF gives the State the breathing room to make these adjustments in how Ireland is run in future years. Some of the measures mark a move away from the dangerous boom-time revenues such as stamp duty on housing that we became over-reliant on during the Celtic Tiger years.

I'm glad that the Four Year Recovery Plan includes a Site Valuation Tax to fund local services, as well as an increase in the price of carbon that will allow us to decrease our dependence on carbon. These reforms can help ensure that Ireland is better placed to weather future economic storms. Meanwhile, as Ireland freezes, it has been a mixed-bag of a first week at the Climate Change talks in Cancun in Mexico. Hopefully week two will lay the ground-work for a comprehensive agreement in South Africa next year. The Guardian has a nifty online calculator allowing you to reduce the UK's carbon footprint here. Closer to home I'm hopeful that our own Climate Change Bill will be published this side of Christmas. Ireland's emissions reduced significantly last year, but the Bill will put the onus on all Government Departments to identify and tackle reductions in emissions in their respective sectors. Over on the "Think or Swim" blog John Gibbons discusses whether climate change is contributing to the big freeze. I'm heartened by the amount of discussion in recent times around the theme of political reform.

This morning I was alternating between listening to Irish Independent Editor Gerry O'Regan receiving a grilling from Ivan Yeats on Newstalk, and Fintan O'Toole on RTE Radio One discussing his petition to reform Irish politics. O'Regan was getting a hard time for the role of his paper in fueling the fire of property speculation, but he seemed to sidestep the issue by saying that his principle role was to increase newspaper sales which seemed like a fairly honest admission. O'Toole was being pushed as to why he wouldn't run for office himself, but stated that he was happier stimulating debate. I'm in broad agreement with the ten points on O'Toole's petition, and feel his proposal to end clientilism is a good one.

The New Zealand electoral system seems similar to what he is proposing. Half the Parliament there are elected on a list system where you vote for the Party rather than the individual, and half are elected on a system broadly similar to our own, and I feel something along similar lines is appropriate. Perhaps the additional radical step of rewriting the constitution is needed to help draw together the many threads of discussion that are currently taking place on the airwaves and elsewhere. It is something that the people of Iceland have embarked upon, and could be a way to tackle parliamentary reform, as well as enshrining ideas around equality, property and family rights that have been much debated over the last few years. In the meantime 7th December is Budget day, and I'm hoping that Brian Lenihan will carry through on some of the reforms that we've been discussing with him that were mentioned by the Tanaiste on the Week in Politics last Sunday.