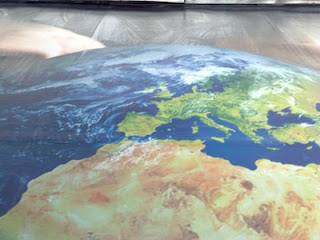 Made it along to the briefing in the Science Gallery at lunchtime today.

Great discussion of the issues, with a large crowd.

Meanwhile I just got a timely reply to my Question to the Minister for Health...

DÁIL QUESTION addressed to the Minister for Health and Children (Ms. Harney (Dublin Mid-West))
by Deputy Ciarán Cuffe
for WRITTEN ANSWER on 30/04/2009


* To ask the Minister for Health and Children the type, brand and number of units of anti-viral medicines available to deal with a possible pandemic in view of the outbreak of swine flu in Mexico and elsewhere; and if she will make a statement on the matter.


REPLY.
Stocks of antivirals sufficient to treat 47% of the population are currently stockpiled.
We have one million courses of adult dosage Tamiflu; 177,958 of 30mg paediatric capsules; 51,549 of 45mgs paediatric capsules and 706,000 courses of Relenza in stock for an Influenza Pandemic.
Recommendations for the stockpiling of antivirals are kept under constant review by the Pandemic Influenza Expert Group. The quantity of antivirals in stock or on order is enough to treat almost 2 million people. This compares very favourably with other countries across Europe and beyond.
Posted by Ciarán at 5:41 pm No comments: 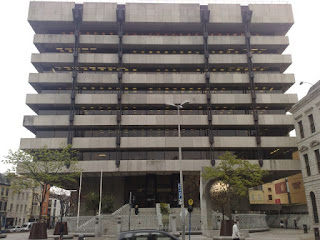 The Tree of Gold or Crann an Óir sculpted by Eamon O'Doherty in 1991 stands outside the Central Bank's Headquarter Building on Dame Street in Dublin. The bronze tree (not gold) is overshadowed by a curious piece of granite clad concrete that overshadows its leaves. Perhaps it's an appropriate metaphor for the way that construction and speculation took over during the boom years. Indeed the building itself designed by the late high-flying architect Sam Stephenson was built some 10 metres higher than the the drawings submitted in its planning permission, a fact only noticed apparantly when the city planning officer looked out from his office which was then just across Fownes Street, and scratched his head at the mismatch between the plans and the building.

The Irish Green Party's Housing Policy, adopted in 2004 pointed out that "land speculation and the hoarding of zoned land have distorted the housing market and impeded the provision of affordable housing" and stated that the Government needed to "progressively limit the amount of money that lending institutions can lend for house purchase in order to reduce the price of housing." Back then we were in opposition, now we're in Government. We didn't cause the problem, but we are working hard to clean up the mess and get 'Ireland Inc.' back onto an even keel.

The National Assets Management Agency (NAMA) will be used to consolidate and stabilise our banking and property sector. It will be the largest property owner and developer in the State. It is crucial that the regulation and overview of NAMA is free from undue political interference, once it is up and running. I'm glad to see a health debate emerging about the foundation of NAMA. A glance at the Irish Times Opinion piece 'Nationalising banks is the best option' last Friday might make you feel that an incorrect decision has been made, but I'm not convinced. Twenty economists put their names to the piece, and the line-up included many of the heavy-hitters from the UCD Economics Department. As a a piece of rough and ready research I went over to the excellent IrishEconomy website and checked to see how many of their contributors had signed the piece. Only 5 of the 29 had put their names to the irish Times piece. Of course its highly likely that many of them weren't asked to, but still, it wasn't quite a flood.

Nationalisation would still appear to require the same amount of capital as NAMA, so I don't feel it jumps off the page as neat solution. I'd also be a little bit wary of the Department of Finance being put in charge of six major banks. In addition, there's also advantages to allowing some semblance of a real, rather than a full state market to operate in the price of land. There are strong arguments being made in the middle of this economic storm for more and more state intervention and control, but unless this is done at arms' length from the Oireachtas, it will be open to charges of political control.

One of the crucial and positive steps that must be taken, though is to remove the hope value of land that seems almost ingrained in the Irish psyche. That may be happening anyway, to judge from a piece of land a few miles out the road from Sligo that sold for six million a few years ago, and that more recently changed hands for €500,000. However a colleague pointed out that in Catalonia, they have mapped and zoned (in a good way) that entire region of Spain, so that developers know what the development potential is of every patch of land before it is sold. That clearly leads to better planning decisions, more certainty, and more buy-in from local communities. There's still far too many County Managers here in Ireland granting permission for rural business parks, and having their decisions overturned by An Bord Pleanála.

NAMA will have to maximise the value of its loan book and the underlying assets in the interests of the State and tax payer. I'm hoping that transparency and smart planning might allow us to look beyond a very narrow fiscal definition of maximising, and ensure that the best use is made of all assets. That could mean converting a hotel close to a hospital into step down beds, or producing a proper planning scheme for lands adjacent to a railway line before it opens so as to maximise value and sustainability, rather than selling off the four green fields for face value. For starters they'll need to prioritise sites for development according to the National Spatial Strategy.

Things are moving fast though. NAMA has a website, and they seem to be hiring from what I can see on their home page. 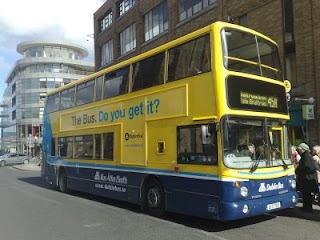 I missed an interview on Newstalk's lunchtime show with Eamon Keane today.

I was supposed to be discussing the possibility of a car scrappage scheme. As it happened, I was stuck in the boardroom of Buswell's Hotel across the road from Leinster House with a bunch of car dealers. (Is 'clutch' the collective noun?) I came out and there was 11 missed calls and 7 new messages on the phone. I had missed the interview. I did get a chance to talk about it on Q102 later on, and while not quite going as far as George Monbiot, I did say that a car scrappage scheme did not make sense. I don't believe that we should be putting scarce resources into the non-productive economy.

If money is scarce, let's use it to build Metro North. Each individual station on that line would be in the top ten list of building sites in the State. The project would generate thousands of jobs in construction, and would lower our carbon footprint and create many jobs during operation. Dublin needs a high capacity north-south public transport backbone. It could even continue south as far as Bray via the Luas green line.

Meanwhile on the subject of improving public transport, it's about time that we gave buses the priority that they deserve through the centre of Dublin. It's not fair that buses get stuck behind SUVs heading for the Brown Thomas Car park. If we want buses that keep to a schedule we've got to ensure that they don't get snarled up in traffic in College Green behind these kind of lines of cars. Currently it can 40 minutes or 10 minutes for a 46A to get from Parnell Square to Stephen's Green. No wonder people says buses aren't reliable.

The info on the bus gate is here on Dublin City Council's site, but you've missed the consultation period which ended last Friday. Here's the Green Party's PR on the matter. I'll get around to putting our submission on line soon.

I had a chat with Fergus O'Dowd Fine Gael's Transport Spokesperson today and he agreed with me. I was on radio yesterday with his colleague Cllr. Paddy McCartan who sits on Dublin City Council and unfortunately he doesn't want to take the cars out of College Green. While I was on radion I had a sense of deja-vu, and then I remembered. I had heard the same arguments about taking cars out of Grafton Street 25 years ago. Scary.

Conor Faughnan has also been discussing the issue, and he's taking the same line as he did with the Stillorgan QBC a decade ago: in favour in theory, but not in practice. Back then even the Chartered Institute of Transport had to tap the AA on the shoulder and politely point out to them the error of their ways. The SIMI wasn't exactly on the side of the angels either, back then, opposing it I suspect in theory, as well as in practice. I actually agree with a lot of what the AA is saying: YES, we need a radical reform of Dublin Bus routes, YES , we need decent cycling lanes as well, but I'm always a bit nervous when the perfect becomes the enemy of the good.

Plus ca change. Tom Coffey from Dublin City Business has a large wish-list of things that have to happen before the bus gate proceeds:

Sometimes you'd tear your hair out.

We'll see how these things pan out. It'll be up to Dublin City Council to make a final decision in a few weeks on the issue.