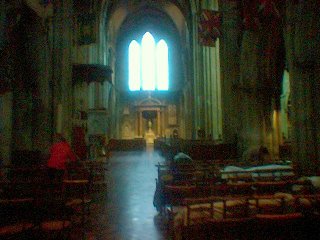 Tough times in St. Patricks. The Dublin Ambulance crew are worried about the men. They say that organ failure can happen as quickly as a heart attack.

The UNHCR says "the significant upsurge in violence in some parts of the country has limited the access to those areas by both international humanitarian actors and Government representatives, denying the population access to entitlements, services and protection." Meanwhile the Department of Foreign Affairs tells us not to visit.

Above the men hang the regimental flags from long ago. A plaque on the nearby walls states "Sacred to the memory of James Slator Cummings Esquire, Liutenant in the 9th Regiment of Foot who was killed in action in Afghanistan at the forcing of the Kyber Pass on the 5th April 1842 aged 23 years while gallantly leading a company of that regiment, a brave soldier and a sincere christian."

As a friend of St. Patrick's Cathedral I never thought I'd see a scene like this within the walls. I'm glad to hear reports that the hunger strikers are taking water. The children should give up their strike now. It is heartening that the Department of Justice will meet with the men. This case highlights the difficulties of the refugee appeals system in .

The Refugee Appeals Tribunal is famous for the secrecy under which it operates and the lack of transparency surrounding its decision making process. The Minister appoints the members of the Tribunal and there is no independent selection or interview procedure. Only one case in five cases of those who have sought asylum here has been granted. Of course the system can be abused, but these men are desperate and we need transparancy to ensure that these mens' applications are carefully considered. 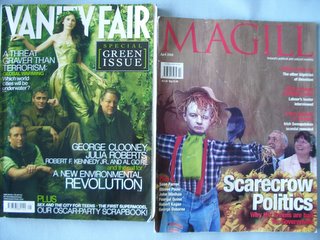 The politics of colour showed through in John Lalor’s piece in this months Magill magazine. Headed ‘Green for Danger’ the author attempted to show that the Greens are for the birds. The piece mocks the environmental movement, and suggests that environmentalism creates the mirage of ‘community’. Although the writer states that the statements from the likes of Dave Foreman have no official connection with the Irish Green Party, the strawman is carefully positioned for maximum effect. Joschka Fischer’s behaviour is also ridiculed, but Lalor heads back almost forty years for that particular piece of mud-raking, and ends up by suggesting that under the camouflage of Green policies red hearts are beating strongly.

Not in Vanity Fair I suspect. Editor Graydon Carter suggests that ‘Green is the New Black’. In the Green Issue George Clooney, Julia Roberts, Robert F Kennedy Jr. and Al Gore contribute, and call for a new environmental revolution. I particularly liked Al Gore’s article where he quotes General Omar Bradley who said at the end of World War II: ‘It is time we steered by the stars and not by the lights of each passing ship’. It is also important to stress as Al Gore does that a more environmentally sound future can be a good news story. If we want to, it can include better planned neighbourhoods, more Brownfield rather than sites; homes that are better insulated and cheaper to heat, more time with your kids. It does involve government support and intervention though, and a laissez-faire approach just won’t deliver the goods.