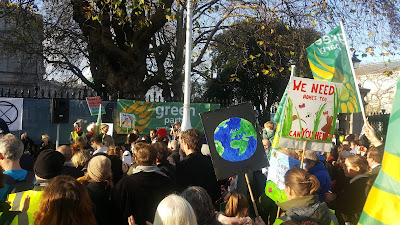 "All political lives, unless they are cut off in midstream at a happy juncture, end in failure, because that is the nature of politics and of human affairs."

The lines came from Enoch Powell, and it wasn’t his rather chequered political career he was referring to, but that of Joseph Chamberlain, a British statesmen who wonderfully once campaigned on the slogan ‘three acres and a cow’ to capture the agriculture vote. His son Neville became Prime Minister and perhaps lived up to Enoch’s assessment of his father, given that he sought to appease Hitler in the 1930s.

Politics is an unusual calling. We outbid our opponents in promises to voters, and ultimately disappoint our electorate when we do not deliver all we stood for. If we do not make promises, we are ignored, and so we walk a path between rhetoric and reality. We campaign in poetry and govern in prose. Ultimately, we can never deliver on all we set out to achieve. In the parallel universe of academia, propositions must be evidence-based, and better still published in peer-reviewed journals before they are accepted. In politics, we rely on the electorate, and the fourth estate to capture the essence of our ideas, and achievements, or lack of them. Even though our ideas and policies are grounded in evidence, their implementation relies on the goodwill of the electorate. Implementation of our entire Manifesto can never be achieved.

Back when I was on Dublin City Council, Councillor Andrew Montague told me that all you ever get in politics is incremental change. Over time though, he went on to say, it adds up. You think you are achieving almost nothing and then, as the years pass you realise that the world has changed, and you played a part in making it happen.  Back in the 1980s a group of us campaigned for light rail as an alternative to road building in Dublin. Our button badges read ‘trams not jams’. Decision-makers laughed at us and accused us of being stuck in the past. In 1991, in my first term on Dublin City Council I worked with other councillors to promote public transport investment rather than roads. Over twenty years later I took my place on the first tram leaving Stephen’s Green. Subsequently, we launched a ‘Join the Dots’ postcard campaign to link the red and green lines, and that took a decade to happen, with opposition from vested interests who felt the car should still be king. When I entered local government the city centre population was declining, and we feared Dublin would become a ‘doughnut city’ with a hollowed-out centre. The ‘Living City’ movement led by the late Deirdre Kelly turned the tide and paved the way for policies that allowed the inner city to double in population. Ideas take time to take root and grow. In the 1980s the Green Party campaigned for a Basic Income, and an end to smoky coal. The draft Programme proposes a National Clean Air Strategy, and a Basic Income trial. The steps to implementation are agonisingly slow.

Thirteen years ago, I met a few pals in the Stag’s Head pub and discussed whether the Greens should enter Government. There was heated debate and no clear consensus. In these COVID days of back-to-back Zoom calls there hasn’t been the chance to catch up with my mates, and a pint in the pub is a distant memory. The question remains: should we enter Government or offer advice from the side-line. The draft Government Programme is in sections visionary, but in other parts downright irritating. It proposes a marriage of convenience between three parties that are far from aligned in history or ideology. It is a tough read, all too often opts for studies, reviews and reports rather than action. It fails to grasp the nettle of Seanad reform, and does not recognise the severity of the housing and homeless crisis, and yet…

The Programme seeks to end Direct Provision by 2025; it allocates extraordinary funding to active travel and public transport and proposes to retrofit 500,000 homes by 2030. On housing it offers 50,000 social homes, and a Housing First approach to homelessness. It intends to reduce greenhouse gas emissions by 50% within a decade. None of these gains will happen overnight, and it will take time to ramp up our efforts.

And the planet continues to burn. Global atmospheric carbon dioxide concentrations were 386 parts per million back in 2007. The number is 413 today. Since we met for a drink thirteen years ago almost 400 billion tonnes of CO2 have been added to global emissions. It is as clear that we need to act, with an urgency lacking in the major parties. We cannot state that we have a decade to save the earth and then suggest that we sit this one out until the time is right. Meanwhile in the European Parliament we’re adopting a European Green Deal and a Just Transition for regions moving to a low-carbon economy. We can do that here at home. With twelve TDs we cannot dictate policy in every aspect of the new Government's work, but we can sow seeds that will grow over time.

Being in Government from 2007 to 2011 was hard. It may be even tougher now. No-one knows how long the COVID-19 pandemic will last, or its long-term impact on our economy that is highly dependent on exports and tourism. If we do enter Government, it will be a tough and demanding job. A decade after we were spat out, I believe we should enter Government again, and play our part in tackling the immense challenges that lie ahead. The road ahead is a tough one, and there will be failures as well as gains. We will never realise all that we wish to achieve, and regardless of the outcome, there will always be naysayers suggesting that we have achieved nothing. The issues are urgent, we cannot wait. I believe we should enter Government.

Only those who dare to fail greatly can ever achieve greatly.