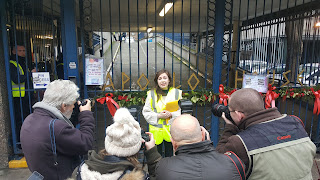 Rows about Apollo House aren't in anyone's best interests,  least of all those in chronic need of housing.


I only wish though that more of the goodwill and endorsement channelled towards Home Sweet Home could be directed towards accepting higher taxes to pay for decent housing for those in need.The remarks of Dublin City Council's Chief Executive Owen Keegan in an interview in the Irish Independent didn't help however. He dismissed the occupation of Apollo House as a stunt, and this was bound to cause anger and resentment. I suspect his remarks were prompted by a certain frustration over the work that the Council does that isn't recognised. The provision of 70 bed spaces at Little Britain Street, another 70 on Benburb Street and on Francis Street, and 20 more in the Civil Defence building at Wolfe Tone Quay haven't been in the limelight, even though they amount to five times as many as are currently being provided by Home Sweet home at Apollo House.

What many people also fail to recognise is that most of the capital funding for housing comes from central government, and Dublin City Council doesn't have the powers to simply get out there and build, much as we would like to. Ultimately Minister Simon Coveney and his colleagues in cabinet make the call on how much is spent on housing. In recent years this has been informed by the Fiscal Space that we operate under, and this is determined by European Union rules and in a nutshell limits the amount of money that we can spend on housing. What we should be doing though is shifting the capital spending around significantly. It simply doesn't make sense for Government to be be spending €400 million on gold-plated road schemes when thousands of families are living in sub-standard temporary accommodation. We must spend more money on homes and less on roads, and this is what Coveney should be arguing for at Cabinet.

We've also got to recognise that Housing Associations are not the only game in town when it comes to housing for those on lower incomes.  Local Authorities should be funded to build decent quality housing schemes, just as they did in the 1930s, 1950s and 1970s. We also need to ensure that such housing isn't just reserved for people on the lowest 10% of incomes, we need to implement a Cost Rental model that encourages people on different incomes to lives in the same building and thus combat the segregation that bedevils housing policy in Ireland.

New forms of funding are also required. We should redouble our efforts to draw down European Investment Bank funding for housing. If we can do it for motorways, surely we can do it for homes. We must also follow the lead of other European countries and use some of our semi-state pension funds for housing. The irony of the CIE group having €1.5 Bn. in a pension fund that goes into the UK markets while the sons and daughters of Dublin Bus workers can't access housing is acute. Its also worth noting that over one hundred years ago the privately owned Midland Great Western Railway Company built the beautiful Great Western Square in Phibsborough for their key workers, this should also happen in the twenty-first century.

Vacancy rates need to be looked at in existing housing. In Dublin's North Inner City, the area that I represent as a councillor there were 67,309 residents in 2011. However there were also 5,095 vacant households. an astonishingly high number. Sure there will always be vacant homes, but reforms are required. Probate should be speeded up so that buildings aren't left empty for years. The Derelict Sites levy should be increased from 3% to 10% of the value per years, so that owners of vacant property refurbish them and let them out more quickly, (and that should include state owned buildings), and vacant sites should be built on or the owners forced to sell them on. The Living City Scheme should be simplified and extended so that older buildings become a good refurbishment opportunity. I look forward to someone answering the phone in Dublin City Council and saying "Living City Scheme, how can I help?"

Self-build housing can also contribute to solving the housing crisis. In Amsterdam groups of prospective home owners are being sold sites by the City Council, and are pooling their resources to put a roof over their heads. This can and should be an objective of Dublin City Council.

As NAMA recoups a significant amount of the value from the loans that it manages, and as Ireland's economy improves we should consider legislative changes that would focus its mission statement more firmly on the housing crisis, and ensure that  key sites have a significant proportion of affordable housing linked into their development.

The Home Sweet Home initiative at Apollo House is working, as it is putting pressure on Simon Coveney, the Minister for Housing to deliver and prioritise housing. However we should recognise the work that is being engaged in by Dublin City Council to tackle homelessness as well as the constraints that they operate under.

The name Apollo House reminds me of America's Space Program, which was kick-started by JFK's speech in 1962 where he announced that "We choose to go to the Moon". The moon landing occurred less than  eight years after he gave that speech. In 2016 we need a space program in Ireland, but one that resolves to provide living space for all, and end homelessness before a decade is out.
Posted by Ciarán at 6:05 pm 2 comments: