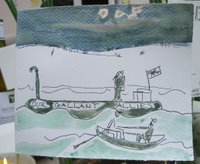 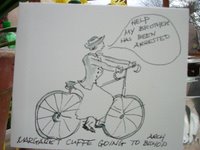 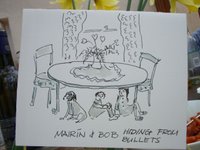 That phrase felt like the right greeting last Sunday evening at the post-parade bash in . I used it a few times, but after a few raised eyebrows I kept it to myself. Someone suggested that it was more appropriate to a drunken fan during a Munster Final, so that shut me up. The parade seemed too militaristic for my liking, and more of a cynical attempt to reclaim the votes lost to Sinn Fein, rather that any serious attempt to honour those of 1916. I’m not quite sure whether the fallen heroes would have appreciated the three Government jets.

The post-parade party in was another thing entirely. It was a celebration, and a good one at that. I met Michael Collins’s grand nieces, and they seemed delighted with the day. One corner of St. Patrick’s hall seemed jammed with de Valeras of various descriptions. The outside corridor was packed with army top brass at one end, facing off the diplomatic corps at the other. The State Apartments were open, but it came as a shock to enter the room where a wounded Connolly had spent his final days prior to execution.

We held an American wake on Easter Sunday for my brother who was heading off to work in . My sister was concerned that the next generation weren’t up to speed on their history and had made up a series of sketches to introduce them to their past. Important to stress the German connection to my nieces whose mum is from those parts, but more confusing to explain how my great-uncle Ignatius was in the British army while another great-uncle Patrick was busy setting up the Irish National League, and editing An Phoblacht.

Some great stories came out of the last fortnight. I remembered a conversation a few years ago with an elderly nun who described lashing down with her sister to see a woman wearing trousers in Stephen’s Green. Constance Markievicz apparently instructed them to “Go home Children, you might get hurt.” Good advice, as she was no pacifist herself.

I met my aunt Mairín at the opening of the 1916 exhibit at the at Collins Barracks. She remembers sheltering under the dining-room table in their home on Mary’s Road off as the bullets flew from the shoot-out around the corner on where many rebels, and members of the Sherwood Foresters Regiment were killed or injured. Meanwhile their mother was off on her bike trying to get the Archbishop to intervene and release her arrested brother Paddy. All in all, it was a fascinating few days, both then and now.