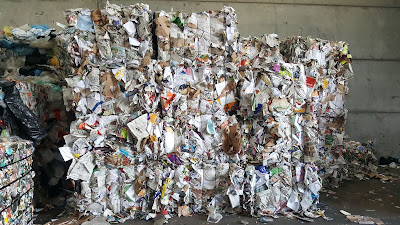 Like many Dubliners I woke up on Saturday to the acrid smell of smoke. At first we thought there was a fire in the house, but as dawn broke we could see a large dark plume of smoke in West Dublin coming from the Oxigen plant in Ballymount. It soon became clear that one of Ireland’s largest buildings had gone up in smoke. The Recycling facility accepts waste from all over Dublin and beyond. Most of the contents of the  city’s green bins ends up being processed there. Thankfully, no-one appears to have been injured in the immediate blaze, but as the fire smoulders on 48 hours after the blaze there are many questions for the Environmental Protection Agency and Oxigen to answer.


A minimalist statement on the Oxigen website states ”Oxigen Environmental would like to assure all customers that the fire at our Ballymount, Dublin site will not disrupt any services.”  Their Twitter feed was last update on 18 December last. This lack of information is entirely unacceptable for a company that accepted over three thousand tonnes of hazardous waste at their site in 2012.


Thousands of people live close  their site at Ballymount near the Red Cow Interchange, and if I was woken by the smell in Stoneybatter siX kilometres away i can only imagine what the smells and fumes were like in Crumlin and Bluebell that lay in the path of the smoke cloud.


Thankfully the Environmental Protection Agency issued advice stating that those in the path of the smoke plume should  stay indoors and keep windows and doors closed. However people need to know how dangerous the smoke is, and whether parents should move young children or elderly family members away from the area. It is unacceptable that more detailed information is not available two days after the blaze. The EPA also doesn’t appear to have up to date information available on their air quality website although their air quality Twitter feed gave some information, but no detailed breakdown of the type of pollution.


There are also questions to be answered from Ballymount as to why they were storing so much inflammable waste on the site without adequate fire breaks between stacks of material wrapped in highly inflammable plastic. An image of the plant taken from above last Summer shows a huge amount of material in rows over a hundred metres long.


South Dublin  County Council needs to comment on whether their Fire Certification allowed such a large amount of flammable material to be stored in close proximity to the plant itself.


Another worry is how much pollution of groundwater and rivers has occured. The run-off from fire-fighting has potential to kill fish life and pollute the Camac River and the Liffey, and it is unclear whether measures to retain this contaminated water were in place.

Dubliners are entitled to more detailed information about what has occurred in Ballymount. Parents with young children who live close to the Plant are justifiable afraid and concerned for their children. The company and the various local authorities and other agencies need to make available clearer information to the general public


Looking ahead there are questions about the cause of the fire and whether all permits and permissions were in order. We do know that there were two fires at the plant in 2012. South Dublin County Council must state whether Planning Permissions and Fire Certificates were in order. The EPA must consider whether the storage of so much waste on the site was compatible with the Waste License that they issued.
Posted by Ciarán at 8:54 pm No comments: