What next for Dublin's Charlemont Street? 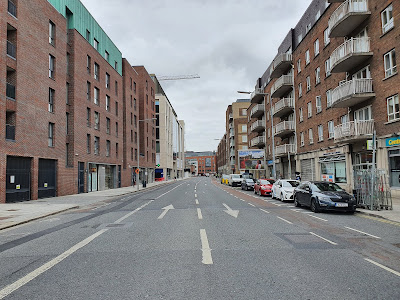 Looking down Dublin's Charlemont Street, pretty much everything you see was built within the last thirty years. We haven't quite cracked decent modern street design, have we?  I mean, where are the trees!

On the plus side we're at least building (or re-building) streets again. Back in the 1980s many felt that car parking was best placed in front of a new building, and the building itself should be set back from the road. In many parts of Ireland this is still the case and road traffic dominates. However, what struck me is that there isn't a shred of greenery in the image. Best practice these days means at least planting street trees along a road that is twenty metres wide. We could also do with some public seating, protected cycle lanes, attractive streetlamps, less advertising placards, and use decent materials rather than grey concrete for the footpaths and tarmacadam for the roads. and that's only for starters.

The challenge is that no-one sat down and designed this street. Well, actually Sir Patrick Abercrombie did, back in the early years of the twentieth century, but that's another story. Looking at what you see here, architects designed the buildings on either side, and engineers provided (and designed) the carriageway in between. I doubt that Dublin City Council's urban planners or landscaping staff were even shown the drawings. That is why we need a Head of Urban Design or Public Realm at Assistant Chief Executive level within Dublin City Council. The Chief Executive Owen Keegan should create this post and ensure someone with the ability to knock heads together gets the job.

What brought me into politics thirty years ago was that the then Dublin Corporation felt that 'sorting out the traffic' was the only game in town. By traffic they meant cars, and they were happy to demolish chunks of the city to make it easier to drive from the suburbs to the city and back every day. When I was first elected as a councillor in 1991 one of my first acts was to seek support from dropping many of these ill-conceived road proposals from our plans and promote light rail instead. As it happens at the end of the view in this photo there used to be another street: 'Charlotte Street', and it was built over by a developer. Dublin Corporation even held a Street Closing Inquiry in the early 1990s, where I presented evidence that the Street should be kept, rather than built on, but my plea fell on deaf ears.

Problems remain, though in recent years senior Council staff understand that streets aren't just for traffic, they also have a social and commercial function. Over the years we've moved the debate on from providing from cars to facilitating public transport with the introduction of Quality Bus Corridors in the late 1990s. Since then, initially reluctantly, but now with enthusiasm Dublin City Council is rolling out walking and cycling infrastructure. Even now there’s too much emphasis on plastic bollards, rather than on using greenery or planters to separate cyclists from cars. New concerns and ideas about greening our cities, and sustainable urban drainage demand a co-ordinated and design-led approach. In the past, and in some quarters today trees are seen as at best and afterthought, and at worst a problem, this must change. I'm glad to see that the City Council has appointed an arboricultural, or Street Tree Officer. Different players must work together in an inter-disciplinary approach to 'co-create' quality spaces and places. Communities also need to be at the centre of the process, and not just involved through a public submission period after the plans have been drawn up.

We need to adopt a 'whole streets' approach to ensure everyone is focused on improving the public realm: from public lighting engineers to the Parks Department. Far too different staff sit in separate silos and communicate by long-distance semaphore! Within Dublin City Council I struggled to ensure the posts of Dublin City Planning Officer, and City Engineer were filled after long vacancies. We also have a City Architect. We now need to complement these roles with a head of Urban Design. That person could ensure that all these civic officials work together to up the quality of our public realm. Simple tasks, like ensuring that road surfaces are reinstated road works might come under their responsibility. As it happens, we do have a Public Realm Strategy, but it can be hard to know who ensures that all staff are focused on delivering it. Just look at the streetlights in this photo. No-one in the Council woke up some morning and said I am going to give Charlemnt Street the best new street lighting that we can design! The BusConnects project has the potential to dramatically improved the public realm. Some of the draft proposals are good, but others fall far short of what is required. Let's hope that the plans that go to Bord Pleanála are of a high standard. If we try and 'bolt-on' bus lanes by widening streets and maintaining the same level of car-use we will be on a hiding to nothing.

Streets aren't just for traffic, they must provide for social interaction and commercial activity, and this requires a joined-up approach by developers, engineers, and all other disciplines to ensure the public realm is improved. Back in 2010 when I was a Minister of State with responsibility for planning and sustainable transport, I kicked off a process that led to the publication of an Irish Design Manual for Urban Streets and Roads (DMURS). It helps the different players to design a decent street, but it doesn't automatically ensure that good design is achieved. We need to tackle this, from providing decent street signs to getting rid of crappy randomly placed utility boxes that were put in place with the Cross-City Luas.

At this stage in Ireland, we need clearer guidance. Transport for London have a 'Streets Toolkit' which is helpful, and they've also produced good information on taking a 'Healthy Streets' Approach. DMURS helps, but more detailed street guidance is now required.  Often councillors get blamed for poor planning decisions and poor streets. To a certain extent that is a fair criticism, but I would say that the level of responsibility, funding and devolved powers in Irish local government is amongst the worst in Europe. It is therefore hard for councillors to make a difference. (Believe me, I've tried!) Looking ahead we need to devolve more powers to our Councils, put in place an elected Mayor for greater Dublin, and ensure a senior official is responsible for quality streets and providing and managing the decent public realm.

What next for Charlemont Street? That's up to Dublin City Council. My work is focused on European issues, and while I do spend time on policy documents such as a Sustainable and Smart Mobility Strategy where I'm prioritising active travel (walking and cycling) and public transport, the EU doesn't micro-manage things at a national or local level. Really it boils down to local councillors and officials sitting down to get things right. Personally, I'd reduce the street back to two rather than three lanes of motorised traffic, and add segregated cycle lanes, as well as wider footpaths. I'd narrow the width of these lanes to around three metres, as wide lanes encourage speeding. I'd put in semi-mature street trees with wide tree pits that allow for planting and storm water drainage. I'd also put in attractive street lighting, and some quality street benches or seating where neighbours or visitors could sit down and have a chat. All of this can be done, it simply requires the political will.