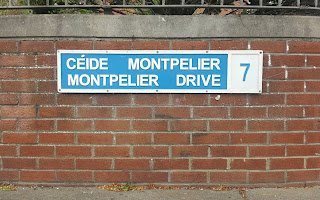 Signs are something we tend to take for granted in the city.

In Dublin City for some time we've gone for a fairly conventional blue-coloured bilingual street sign that tells you where you are. They're fairly inoffensive, but pretty damn dull. We've moved back to cast iron after a long period of cheap as chips aluminium signs that faded to illegibility after twenty years, but there's still a lot that could be done to improve them.

Last week at Dublin City Council's Transportation Strategic Policy Committee which I chair we considered a report on the issue. I wasn't altogether happy with what was presented and I put a wording to the floor as follows which we agreed:

“That this committee notes the report on Street Nameplates and furthermore:
- recognises the attractiveness of design of early twentieth century Street nameplates in Dublin City and suburbs;
- understands that the ‘Transport Medium’ typeface was developed in the UK for use on their motorway network rather than on city streets;
-commends the inherent beauty of both traditional and contemporary Irish typefaces;
-expresses concern at the use of bold lettering, and recommends that alternative typographical combinations be considered, such as  a combination of upper case and lower case lettering;


and requests that the manager seek the advice of the Institute of Designers in Ireland on this and alternative approaches, and shall revert to this committee again within six months with a further report on the issue.”

These ideas seemed to go down well and Joe.ie did a little write-up on the issues. 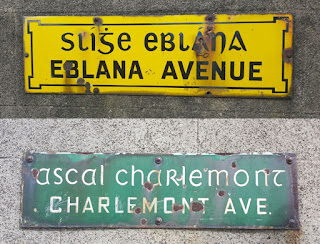 I've nothing against Transport Medium, designed apparently by  Jock Kinneir and Margaret Calvert in the late 1950s but it sort of screams third motorway exit after Birmingham rather than Stoneybatter or Sandymount. There's certainly room for improvement. These signs for Eblana Avenue and Charlemont Avenue are from Dún Laoghaire. I guess they date from the early or mid twentieth century but they really have a strong sense of style and distinction to them. I'm not a fan of using Upper case all the way through; it is a bit like sending SCREAMING ALL CAPS text messages to someone, best avoided. Besides we recognise the shape of words better when they contain mostly lower case letters. 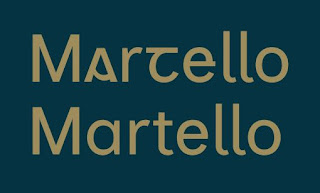 I've tweeted a bit about this over the last week or so, and have come to realise that there's a lot of people out there interested in typography. I've met David Wall from Workgroup.ie who suggested that the Institute of Designers in Ireland  might be able to help us out. I also received a nice note from John  Harrington whose firm designed the modern Irish font bilingual typeface Martello used in the 1916 Witness History centenary exhibition which opened last year in the GPO. Rob Munnelly sent me a slide deck with some great advice, and Dave Foley asked how he could support any new initiative. There's a lot of people who would like to see improvements.

I'm in awe of Finland though. They recently commissioned the Finlandica typeface and it gives a fantastic crisp clean identity for that country. I suspect we don't need to go that far, certainly not in Dublin, but we could consider some contemporary Irish typeface for use on street nameplates in the city.

One last gripe about the current proposal is that it makes no distinction between Irish and English other than putting the Irish wording ahead of the English text. This seems to be a response to regulations brought in by Éamon Ó Cuív in 2008. Those regulations however don't insist on the same font. They state that the text in the Irish language shall not be "less prominent, visible, or legible than the text in the English language". It seems to me that the door is open to using a contemporary Irish font for at least the original Irish names on street signs.

Street signs are a huge part of our city's identity. Think of the wonderful street signs in Paris and elsewhere. I think we can do better than this in Dublin, and I'm hoping that our engineers will step up to the mark on this one.