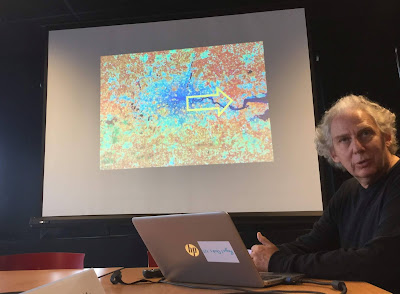 I took part in the RIAI’s annual conference today, virtually of course. After Ciaran O’Connor’s opening remarks Professor Ricky Burdett from the LSE gave a masterclass in how cities matter. I graduated last year from the LSE Masters Programme in Cities, so it was great to be reacquainted with Ricky. Roisin Murphy was the MC, and we had campaigned together in my Students Against the Destruction of Dublin (SADD) days, so it was a real reunion, particularly as Grainne Shaffrey who studied with me in UCD was also part of the discussion.

Ricky’s keynote was on Shaping Cities in an Urban Age and he spoke with ease on the growing importance of cities, and the meteoric expansion of cities in Asia, and Africa. Not surprisingly he emphasised the issue of governance, a topic close to my heart! Grainne responded, and spoke about how the Covid_19 pandemic has applied an ‘X Ray’ to our cities and allowed us to reconsider their strengths and weaknesses. It was Brendan Behan of course who stated that a city is a place where you are least likely to get a bite from a wild sheep, but thankfully our thinking on urban issues has evolved since then. Our discussion was followed by a tour-de-force about the Living City from the great Danish urbanist Jan Gehl, but I digress: let me tell you what I said.

Covid_19 showed us the problem of mono-functional zoning. The Central Business Districts of many cities are currently in an ‘induced coma’, particularly those that lack a residential population. In response we should adopt the 15-minute city idea of Sorbonne Professor Carlos Moreno to underpin the next wave of Irish Development Plans. This idea proposes that every city should have almost all that you need located within a 15-minute cycle or walk, so that we are not over-dependent on motorised travel. It has been adopted by Anne Hidalgo, Mayor Paris, which I guess is somewhat ironic given that in many respects it epitomises the 15-minute city, and it may be more appropriate to Houston, Texas.  We need affordable homes in the city, rather than high rents for the few. We need minimum density to be imposed anywhere near a transit stop, and that should be around six stories.

The Covid_19 Pandemic has underpinned the importance of good design and a more equitable city. Whether it is housing standards such as the provision of outside space. As we plan our cities. We need more workplaces in the suburbs, and more homes in the city. This will reduce our dependence on long-distance car commuting and reinvigorate our city centres as well as the dormitory towns.

In urban areas we are finally seeing a more equitable allocation of road space, with wider footpaths and segregated cycle lanes, and this needs to continue. Tele-conferencing has reduced the need to travel, so perhaps we need to rethink some of our transport plans such as ‘BusConnects’. We don’t need to drop the plans, and the latest iteration is good, but it still follows the premise of giving us the options of taking the bus OR driving, and in doing so it risks failing as a ‘predict and provide’ approach to car-use is doomed to fail. We need to ensure that taking the car is not the easiest option and phase out the Internal Combustion Engine in our town and city centres. This will improve air quality, and even more desirable aim as we witness the links between high rates of Coronavirus infection in regions with poor air quality.

Looking at the buildings that we design, we need to up our minimum design standards. Apartments need decent sized generous balconies, that are good enough to live in during a prolonged pandemic. Ventilation (as architects such as Orla Hegarty and others have said) is crucial. However, we also need adequate floor areas, and room heights greater than 2. 4m. On the issue of building typologies should we continue to allow large building footprints that fill in an entire block of should we regulate for decent-sized courtyards with fresh air and sunlight?

Technology should not dominate our architecture, but in a sense Le Corbusier was right. The building is a machine for living in, and we need to ensure the machine is well designed. We need to electrify everything, and link together photovoltaic panels on our roofs to storage batteries, and the electric vehicle outside, as well as an easy-to-use App on our phone.

The big urban decisions around transport, housing, and infrastructure are metropolitan issues, and we need a metro mayor. The current Dublin Mayors: Councillor Hazel Chu in Dublin City; Councillor David Healy in Fingal; Councillor Una Power in Dún Laoghaire Rathdown; and Councillor Vicki Casserly are great but come next June they will be replaced. Having twenty mayors over 5 years in 4 local authority regions does not quite answer Henry Kissinger’s question, so it is now time for a metro Mayor. London has had one for the last twenty years, and it seems to have worked well. You might not like what Ken Livingstone, or Boris Johnson or Sadiq Khan has done, but at least you can vote to kick them out after five years, which is not possible for Chief Executives such as Owen Keegan who are often running the show behind the facade of democracy in our Councils.

Finally, we need to learn from other cities. Imagine if Dublin had the air quality of Stockholm; the integrated transport of Copenhagen; the social housing of Vienna, the parks of Berlin, or the craic of Galway! We should aim high and use the Covid_19 Pandemic as an opportunity to rethink of our policies for both the space inside and outside of our buildings. Cities have a bright future, but we need to plan for this now.

Posted by Ciarán at 6:43 pm No comments: