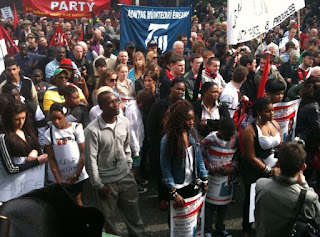 I headed into town today to the march in memory of Toyosi Shitta-bey. Thousands of people walked from the Garden of Remembrance to the Dail. On behalf of the Minister for Integration I addressed the March and here's what I said:

Friends,
We are one.

Today is day of sadness, a day to remember and a time of sorrow.
It is a day to remember the all-to-short life of young, talented member of his community and a gifted footballer
It is a day to remember and to celebrate the life of Toyosi Shitta-bey. My heart goes out to his family. My two young boys are privilaged to go to school with children of different colours, from different nations. It makes their lives richer and it makes Ireland richer. I can not imagine what it would be like for a parent to lose a child in this way.
Today is a day of peace and a day of solidarity.
My colleague the Minister for Integration and Equality Mary White TD stood in solidarity with Toyosi's friends and family at his funeral and is working hard to tackle this act of madness.
She will meet in the coming days with the Nigerian Ambassador. She will work with the Minister for Justice to make sure those who committed this crime face the penalties that they deserve under the laws of this land. She will review the work of the Equality Authority, and if laws need to be changed she will not be found wanting.
Today is also a day to stand together. It is a day to pay tribute to the work of Hartsown Community School, to Shelbourne Football Club, to Sports Against Racism in Ireland (SARI) and the people of Tyrallstown. It is a day to stand up to bullying, to stand up to racism, a day to stand up for integration, for tolerance and a day to stand up for Ireland.

I spoke with friend from SARI in Ireland earlier and they tell me that on the 8th May a memorial game will be played between a team from Charter in Northern Ireland and a team from SARI. Toyosi missed the last game in Belfast. This game will be in his memory.

Assistant Commissioner Mich Phelan from the Garda Forum on New Communities rang SARI last night and asked "How can we help?". On their behalf I appeal to leaders from Ireland's new communities to go to their Garda stations and offer their help to combat racism.
In the words of the late Dr. King it is a time for "dignity and for discipline". We are created equal and we shall work together to "hew a stone of hope out of this mountain of despair".
Let us go in peace to seek justice.

We stand in solidarity with Toyosi and his family
Posted by Ciarán at 6:29 pm No comments: 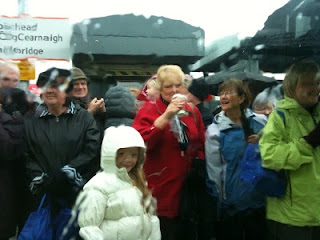 That's the view from the Limerick-Galway train looking out on the platform at Sixmilebridge on the 29th March.

The weather was absolutely miserable, but there were crowds on every platform welcoming the return of a train service linking the two cities by rail once more after a thirty-four year gap. That was my first 'official' engagement as the new Minister for State with responsibility for Sustainable Transport and Travel, and there was a great turn-out of support for the service in each of the stations that we passed through on the journey up from Limerick through Clare and up to Galway.

I've moved across the road from Leinster House and I'm now based in the Department of Transport on Kildare Street. The new job is, both wide-ranging and challenging. In a sense I'm trying to join up the dots on sustainability between the Departments of Agriculture, Fisheries and Food; Environment, Heritage and Local Government; and Transport. The official job title covers horticulture, sustainable transport and travel, planning and climate change.

In the Department of Transport there's a lot of projects slowly coming to fruition that have been around since the early nineties. The old Dublin Transportation Initiative report advocated integrated ticketing as well as real time passenger information, and hopefully I'll be able to push these issues along to implementation. There's also other opportunities. One challenge is the issue of rail freight. Tonnage has declined in recent years, and I'll be doing what I can to make the case for sending goods by rail where possible, in order to improve safety as well as reduce carbon emissions.

In agriculture it has been a tough winter after several years of wet summers. Last week the Department of Agriculture, Fisheries and Food launched the new agri-environment scheme. It replaces the old Rural Environment Protection Scheme (REPS) , and will make payments to farmers for their careful stewardship of the land such as protecting watercourses, and conserving birdlife and built heritage.This was my first formal introduction to the Department, and the agriculture media, so I made a point of stressing my agricultural credentials. My first job was on John Leeson's farm in South County Dublin - milking cows, snagging fodder beet and painting gates. Trevor Sargent has done great work over the last few years in building up the organic sector, promoting a GM-free island developing the 'incredible edibles' campaign as well as the food dudes, and it'll be a hard act to follow, but I'll be doing my best to continue with that work.

In the Department of Environment, Heritage and Local Government, I'll be focussing on steering the Planning Bill through the Oireachtas. A proper planning system can help Ireland avoid future boom-bust cycles by removing some of the 'hope value' from land. I'll also have an involvement in facing up to climate change, peak oil and energy security - three inter-twined issues that require a coherent approach as oil prices head back up again.

Last week we also had Dáil votes on the future of Ireland’s banking system. Politics is the art of the possible, not the theoretical. There are no quick-fix solutions to the mistakes that were made between 2005 and 2007. A friend rang me up to pass on the bad news about the architectural firm Murray O’Laoire going into liquidation. I explained that we have to recapitalize the banks so that good business proposals receive the cash they need to create jobs. Just before Easter I met with Professor Alan Ahearne, economics advisor to an Taoiseach. He impressed me with his coherent analysis of Ireland’s financial challenges.


It’s only as we start filling packing cases in my Dáil office that it finally sank in. I have a new job, new responsibilities and a wide-ranging brief covering agriculture, transport, planning, heritage and climate change. In the course of the week I’ve been down to the Customs House to meet up with their management team. I’ve attended my first press conference in Agriculture House with Minister Brendan Smith and Minister of State Sean Connick. I’ve also met the enthusiastic team running the Sustainable Transport and Travel office.


On Good Friday I was in the constituency office on Patrick Street in Dún Laoghaire reading the Green Party’s submission on proposals for the Deansgrange Local Area Plan. It would be easy to get distracted or spread myself too thinly with the many challenges in each of the three Departments that I cover. However, all politics is local politics as the late Senator Tip O’Neill once stated, and it is important to cover the bases in Dún Laoghaire, as well as working on global and national issues.
Posted by Ciarán at 3:07 pm 2 comments: