Well, It's not quite California, but it IS a great new skateboard facility as part of the Blue Pool complex in Monkstown.

One of the magical things is that it was partially funded by development levies. It's nice to think that we're putting money into more than sewage pipes and roads, when it comes to charges attached to planning permissions.

It was a while since I'd been on a board, and I'm grateful to Cllr. Tom Kivlehan for deleting the shot after this, which shows me in a heap on the ground! It's almost six years since I wrote to the former County Manager Derek Brady asking him to build a skatepark, and, it has been a slow process ever since as you can see from my fairly outdated Campaigns page. However I'm delighted that Cllr. Niamh Bhreathnach and many senior officials in the County Council took up the cause.

Admission is €3 for under 18s, €5 for aul' codgers like myself, and for the moment you can bring along your BMX bike, in-line skates or board, and experiment. Monkstown Pool will throw in a helmet, and there's also a mini-climbing wall, but I wouldn't recommend doing all of this at the same time!
Posted by Ciarán at 1:13 pm No comments:

Proper planning and the public good... Well, as I said to Kathy Sheridan last month: - "the skulduggery that went on in Dublin in the past is now happening around the country", in the form of "councillors who are also auctioneers, who one day are rezoning land in one part of the town and the next are selling land".


Cllr. Lorcan Allan (FF) and Cllr. Hughie McElvany's (FG) contributions made for good television, and our own Cllr. Vincent P. Martin (GP) gave a clear overview of his own county.

To be honest, the reason I did a masters in planning in UCD in the mid 90s was because I felt awful planning decisions were being made for all the wrong reasons, and that was only Dublin. Plus ca change! Car based long-distance commuting from haphazardly rezoned land in the wrong locations is simply unsustainable. The alternative is far from easy. The challenge is to provide decent and affordable homes with amenities within walking distances of the school, shops, pubs and work. If we can make a start on that within the next five years, I think we'll have done well.

The Programme put it up to Minister John Gormley to rectify the planning process, and suggested that we aren't as keen to make radical changes now that we're in Government. Well, it's early days, and we didn't want John, or Vincent for that matter to be lynched before we were a wet week in Government.

Watch this space...
Posted by Ciarán at 9:34 pm No comments: Hopefully the weather won't be as stormy on Thursday when I head off on the 11 am HSS to Holyhead, en route to Brussels for a Climate Change conference on Friday.

I took this pic of Dublin Bay with Howth in the distance from beside the Martello Tower at Seapoint at the commemoration last Monday of the 200 year anniversary of the Prince of Wales and Rochdale shipwrecks in 1807. The weather was awful, and probably not that dissimilar to the storm that led to the building of construction of the breakwaters that now protect Dún Laoghaire Harbour.

Anyway, Friday's conference will be led by three great women: Gro Harlem Bruntland, Mary Robinson, and Margot Wallström (a fellow blogger). It's worth checking our their avatars on the website. For some reason you can get Mary and Margot to talk at the same time, but Gro seems to remain aloof from it all. On a more serious note you can register online and make changes in the Wiki of the communiqué. There doesn't seem to be much interest in making changes, but I I've increased the carbon emission reductions by the year 2050 up to 60-80% instead of the 50% that was previously listed, after all, that's what the European Commission has as a target. We'll see what happens to it on Friday.

The "Road to Copenhagen" refers to the cycle of conferences hosted by the IPCC leading from Bali this December to Poznan in 2008 and Copenhagen in 2009, and what's becoming increasing clear is the need to have clear plans for the post-Kyoto period. Their latest warning last week of the possibility of "abrupt and irreversible" impacts made for a scary read.

John Gormley's 40% improvements in the Building Regulations will hopefully kick in for all new planning applications from the middle of next year, but every other sector from agriculture to industry will have to play its part. The low-hanging fruit is easy, but the scale of the reductions needed requires significant changes in how we go about our lives, such as not flying, if there's a reasonable alternative.

I'll know on Saturday whether the low-carbon alternative was that reasonable this time round. If you see a tired, sea-sick and dishevelled TD crawling off the boat at five in the evening from a journey that began at seven o'clock that morning in the Brussels Eurostar terminal, I may be having second thoughts.
Posted by Ciarán at 2:16 pm 3 comments:

A New Library for Dún Laoghaire? 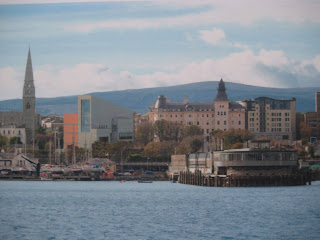 Here's some pix that I took of the exhibition in the County Council offices on the Marine Road. The objective of the competition was  to find a design solution for both building and site that:

* Displays innovative architecture
* Is contemporary in design
* Is sympathetic to its context
* Respects and contributes to the reinvigoration of Dun Laoghaire waterfront.

I think the view from the interior and the main hall would be amazing - quite like the main hall in the Tate Modern in London. The building is bulky, but it seems appropriate that public rather than private buildings should dominate Dún Laoghaire's skyline. 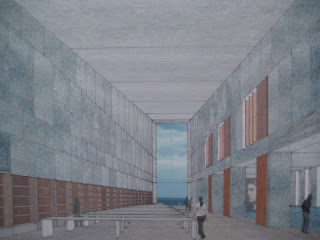 Carr Cotter Naessens from Cork submitted the winning entry, and you've got until the 21 December (from what I can gather) in which to make your views known to the Council. Then it is up to the councillors to vote on whether or not to proceed with construction. Have a look at the display in County Hall, and I'd love to hear what you think.

I'd like to see the Local Area Plan for Dún Laoghaire in place before projects of this scale go ahead, but I have no doubt that my colleague Cllr. Gene Feighery will be making that point. I'm pleased that the winning entry leaves open the option of retaining the Bowling Green on site, even though Andrew O'Connor's Christ the King Statue gets moved northwards. The new building would also be located just beside the Maritime Museum, creating a nice confluence of culture for the heart of Dún Laoghaire.

A modern Library is long overdue for the County, and I'm looking forward to a lively debate about the project. Joan Burton said she was having a bad hair day in the Dáil this morning, and even Bertie was expressing his sympathy for commuters stuck walking to work in the rain today.

Interestingly, the bus drivers simply want to start their routes at Harristown Depot, rather than in the middle of town. It seems like a reasonable request to me. Mind you, we do need a bus regulator to make sure that Dublin Bus and other companies are doing their job.

If I had my way I'd sell off Ringsend, Summerhill, and Donnybrook Bus Depots, put new bus garages on the outskirts of Dublin, and use the money to invest in new buses and routes. It seems crazy that buses are parked on some of the most valuable land in Dublin. Broadstone? I'd hang onto that, and put put back the rail link that used to be there until the middle of the last century.
Posted by Ciarán at 10:21 am 5 comments: Not an easy week, and that was before I saw Una Mullally's piece in the Tribune yesterday. It started of fine with Noel Dempsey's 'L-turn' on the provisional licenses, but Labour's push on their Civil Union Bill on Tuesday put us all under pressure.

The only consolation is that we'll see the heads of legislation on Civil Partnership by the Spring. Do I want to go further? Of course I do. The Green Party's Marriage Policy states that we want to make all terms connected to marriage gender neutral, thus permitting same-sex marriage. That's still what I want to see. Did we get this written into the Programme for Government? Nope.

The views I had before the election haven't changed. However political reality means that the members of the Government Parties vote together: week in, week out. If we do that, we get to enact what we put into that Programme. Sometimes, and it's not that often, we can go further. Would it be any different had we stayed out? I think it would. - I doubt that we would have the March 20098 date for the Heads of the Bill.

I was pleased with Charlie O'Connor's speech. He is a Fianná Fáil TD for Dublin, and he stated:
"I am not in favour of a watered down or lesser status union for same sex partners. There is a major difference in the status of same sex cohabiting couples and heterosexual or sibling cohabitees. The latter can, if they are single, marry under Irish law but gay couples cannot."

However I was concerned when Deputy Martin Mansergh, a Fianná Fáil TD for Tipperary started talking about costs to the revenue, and the red herring of what he termed "interesting clashes between a radical equality ethos and the ethos of the vast majority of our schools", though I nodded in agreement when he accused Fine Gael of making tedious and repetitious jibes at the Green Party for not remaining in pristine opposition. Martin concluded by stating that we need detailed, workable legislation that addresses all the issues and the wide variety of situations equitably.

I'm constantly surprised at the inability of the legislature to keep pace with social change. A Sunday Tribune poll in October last year showed that: "64% . . . support the right of same-sex couples to equal financial and legal rights as heterosexual married couples", and 37% believed that gay couples should be allowed to adopt. Meanwhile, when I sat on the All Party Oireachtas Committee on the Constitution in the last Dáil discussing family rights if felt like drawing blood from a stone to get a minority report agreed that suggested that the following section be added to Article 41 of the Constitution:
"The state also recognises and respects family life not based on marriage. All persons, irrespective of their marital status, have a right to family life. The Oireachtas is entitled to legislate for the benefit of such families and of their individual members.

What I found most difficult to defend last week was the Attorney-General's advice that the Labour Party Bill could be unconstitutional. I hate standing over documents that I haven't had sight of, but that's the joy of being a back-bencher.

At this stage we have the reports: The All Party Oireachtas Committee on the Constitution's Report on The Family and the Domestic Partnerships Working Paper, and the Law Reform Commission's Report on the Rights and Duties of Cohabitants. I'll be writing to Lenihan today, to try and ensure that the timetable stay on track.

I still can't get the Nina Simone track 'Mississippi Goddam' about people saying 'go slow' out of my head, but at least I can keep reminding myself that the 1964 Civil Rights Act was passed the year after Martin Luther King's 'I have a dream' speech on the mall.
Posted by Ciarán at 2:08 pm 7 comments: