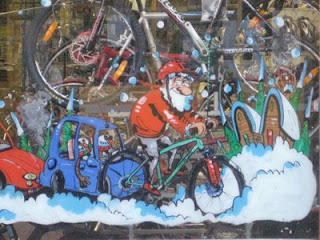 It' s the only way to travel, when the buses are full, and the queues for car parks have your blood boiling.

I spotted this cycling Santa in the window of Mike's Bikes on Patrick Street, just down the road from my constituency office in Dun Laoghaire. Hopefully early in the new year he'll have all the elves signed up for a bike, and safety equipment courtesy of the scheme announced in Budget 2009.

Some good news and bad news to end the year.

On the negative front Pope Benedict has got himself into hot water with his statement yesterday that saving humanity from homosexual or transsexual behavior being as important as saving the rain forest from destruction. Not quite the right note to kick off the season of peace and goodwill. I've issued what I can only hope is a measured response over at the Green Party site.

On a more positive note Barack Obama seems to have appointed a top-notch team of scientific advisers, and that can only be good for the rain forests, and the rest of the planet. For me the lesson from his campaign is not so much about using Gothic font and new media, but about connecting with people. In Ireland knocking on doors and public meetings are as important as always.

Grist, the online green magazine has some tips for the festive season here, and once the twelve days of Christmas are over you can find out where to recycle and dispose of your festive trimmings here.

Thanks for all you comments over the last year, particularly the constructive ones. See you all in January. 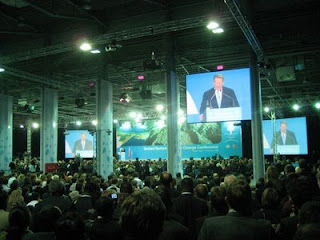 Friday Afternoon. It's wet and cold in Poznan at the Climate Change Conference.

After a fairly turgid discussion of the need for emissions trading in the German car industry sector this morning, I headed over to listen to Al Gore. Two minutes in and I had to hightail it into a radio studio where I waited for a broadcasting slot for the last twenty minutes. Climate change was sidelined by the resignation of Niall Crowley from the Authority. I made the point on RTE Newst One that promoting and defending equality cannot be seen as a luxury to be marginalised when finances are constrained.

Meanwhile back in the Polish conference hall, it's Hamlet without the Prince. While parts of a Climate Change deal are being negotiated here, at the UNFCCC COP 14 talks, the real deal is being struck in Brussels at the Heads of State meeting. COP 14 is the fourteenth Conference of the Parties to the United Nations Framework Convention on Climate Change, and this is part of a process began in Bali a year ago that will hopefully conclude in Copenhagen in a year's time. We're also waiting to see how a new US President will tackle the issue.

There's some good news in the last half hour, a deal has been concluded in Brussels on a European package. French President Nicolas Sarkozy says the deal is historic, but I've just been handed a press release from Friends of the Earth International accusing industrialised countries of failing to commit to immediate binding emission reduction targets. On the positive side of things, Europe can take credit for being (roughly speaking) the first continent to set out a clear plan for tackling high emission.

John Gormley heads up the Irish delegation in Poland. Being a Leo, his weekly horoscope courtesy of Young Friends of the Earth Europe states that "This week the stars are in a perfect position for powerful decisions which can make a real difference for future generations. The Leo should more than ever use its leadership qualities , its creativity and passion to lead the world in the right direction." Well, that's just what the John and the rest of the Irish delegates appear to have been up to for the last fortnight. Pat Finnegan from Grian wants a 30% reduction by 2020, and the Irish branch of the Friends of the Earth want climate change to be enshrined in domestic legislation. All eyes will be on the US over the next few months to see what Barack Obama can deliver.

In Ireland the next wave of economic activity can and should be in green collar jobs. Green energy, green construction, green transport - all of these can create and foster employment in sectors that have experienced a downturn. I'm hoping that this will be part of the economic plans that are under preparation by Brian Cowen. A "Green New Deal"is the obvious way to kick-start a lagging economy, and U.N. Secretary-General Ban Ki-moon said as much yesterday.

I'm heading back out to the afternoon events, now. I'm hoping to attend a talk by the 350.org group on what is required to stabilise CO2 at 350 parts per million in the Earth's atmosphere. On the way over I'll pass a great collection of stands manned by NGOs, academics, business interests and institutions. Feasta is represented by Richard Douthwaite and others with material on 'cap and share' ; the International Atomic Agency has a glossy brochure of nuclear powers station surrounded by trees, the Heinrich Boll Foundation has leaflets on the right to development in a climate constrained world, and I picked up some good background information on the UK Hadley Centre (run by the Met Office) and the UK Tyndall Centre for Climate Change Research, named after our own John Tyndall from Co. Carlow.

As I head in to the meeting rooms Yvo de Boer of the UNFCC has just issued a statement saying that "The European Union's climate deal sends a clear message to the negociations in Poznan and onwards to Copenhagen that difficult roadblocks can be overcome and resolved", and European Commissioner Stavros Dimas has reiterated that the EU will commit to 30% cuts by 2020 "if other developed countries make comparable reductions under the Copenhagen agreement."

Concerns about leakage from these targets remain, but for the moment there's cautious optimism in Poznan.
Posted by Ciarán at 8:25 pm No comments: 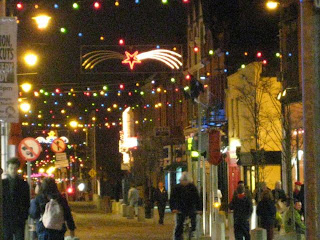 Changes are on the way to Georges Street in Dún Laoghaire. From Monday 8th December car traffic is going to be allowed back down Georges Street. Currently only buses are allowed down the street.

I think this is a step backwards, and I'd be happier if if the street was completely traffic free for most of the day. However the councillors (with the exception of the Green Party) voted a few months ago to allow cars back on to the main street of the town.

There will be a review after eighteen months, but I suspect that once cars are allowed back again onto the main street it'll be hard to remove them.

It's a tough retail environment in Dún Laoghaire. Many people head off into Dublin to do their shopping, and lots more head to the cathedral of retail that is Dundrum Shopping Centre. That, combined with the aging demographics on the eastern side of the County puts pressure on all the businesses in Dún Laoghaire. Some shops haven't had a face-lift in a long time, and could do with some work; at least to replace missing letters on their shop-signs.

Traders in the two shopping centres, Bloomfields and the old Dún Laoghaire Shopping Centre are doing their best, but the buildings suffer from design challenges. Despite the recent refurbishment the old Shopping Centre is not the most pleasant of buildings. It presents a lot of blank brick frontage to the street, and belongs to a period when insufficient attention was paid to making buildings relate to their surroundings. Personally I'd be happy to send in the wrecking ball and start again, but realistically I don't feel this is a runner. Had it been designed differently we could have had a magnificent window facing the harbour, and the building could have been filled with sunlight. Maybe the owners might considering opening up windows to some of the shops on the outside walls, and perhaps putting apartments on top, so as to attract more life to the streets after dark. I feel the town should develop more specialist retail, that would attract more tourists to spend time in the town when they arrive from Wales, instead of heading straight for the M50.

Patrick Street in Dún Laoghaire is one of my all-time favourite streets though. All of human life is there, and there's an amazing moment at 11.45 every morning when the HSS Ferry suddenly appears in the distance, heading out to sea beyond the East Pier. Businesses on the street sell everything from pizza to memory chips, and if it wasn't for the occasional SUV parking on the footpath, it would win any prize going.

The turning on of the Christmas lights was a great occasion. The Dún Laoghaire Business Association had a parade around the town, and a stunning fireworks display at the Harbour Plaza, Around five hundred people waited in the cold for Santa, who arrived on the HSS Ferry from Holyhead. Peter Caviston also appeared on his messenger boy bicycle, and threw dead ducks at the crowd. Depending on which side of the meat-eater / vegetarian divide that you occupied this either horrified you or had you licking your lips. Refreshments were served afterwards, and the event brought hundreds of people into town for the start of the Christmas rush. It's a difficult time for retailers, and the more people that can be persuaded to shop locally, the better it will be for the County.