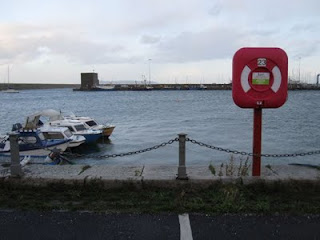 That's the view looking out from the Coal Harbour in Dún Laoghaire on a blustery afternoon. At least we're fortunate enough not to be flooded, or have the roof blown off as has happened with the unfortunate residents in Carrickmines Manor on Glenamuck Road. Thankfully no-one appears to have been injured. Hazel Melbourne said she felt like she was in a scene from the Wizard of Oz when she saw the roof fly past her second floor apartment at 8.30am. according to the Irish Times website.

The floods in the south and west sound appalling. Our own home was flooded several years ago when our youngest was only a few weeks old and we had to escape over the back garden wall and pass the children to helpful Gardaí on higher ground. That brutal combination of damp, fear, destruction and uncertainty for all those affected by flooding can be soul-destroying. I'm glad to say that the Minister for Defence Willie O'Dea told me today that he's instructed the Army's Chief of Staff to ensure that troops will help with the initial household clean-up as well as the emergency works prior to, and during flooding.

The National Flood Hazard mapping website was set up after the floods back in 2002 and provides information about places that are at risk from flooding. The OPW's Flooding website also contains a lot of useful information, particularly on practical information if you're currently at risk (and have access to the web).
I'm still not convinced though that there's enough joined up thinking between planning authorities and the OPW. Minister John Gormley has brought forward the draft "Planning System and Flood Risk Management Guidelines", but the stable door had been left open long before.

There's been far too many images on the news in the last few days of recently built buildings under water. This week's floods may not be due to climate change according to Paul Cunningham's Tweet referencing UCD Professor of Meteorology Ray Bates. as the North Atlantic is apparently experiencing a cooling period. That doesn't take away the higher air temperatures that increased rainfall, though. Regardless of this week's weather, Professor Jean-Pascal van Ypersele's pointed out last night in his excellent EPA sponsored lecture in the Mansion House that the risk of extreme weather events is set to increase, and that's a good reason to do something about climate change. He is the Head of Climatology and Environmental Sciences, University Catholique de Louvain, and is also the vice-chair of the Intergovernmental Panel on Climate Change, so he should know!

IFA President Padraig Walshe has been hitting out at Government spending millions of euro on flood defences, saying the money would be bettter spent on drainage. Actually, I'd feel that more money should be spent on encouraging 'soakage', rather than drainage as this can reduce the risk of flash flooding. More forestry can also absorb high rainfall before it sluices into rivers, and that's what Trevor Sargent is working on through the new Programme for Government. One thing is certain though: the unprecedented levels of development over the last decade resulted in more concrete, tarmacadam and other impermeable land surfaces, and that has contributed to the floods.

Good planning is an important tool that can be used to tackle the increased risk of flooding, and is an issue I've raised before. It's something that our Councillors in Bray -Ciaran O'Brian, Caroline Burrell and Deirdre de Burca used to challenge the rezoning of the flood plain in Bray beside the River Dargle when a combination of councillors from Labour, Fine Gael and Fianna Fail voted to rezone the Bray Golf Course lands. Ciaran O'Brian is currently challenging the planning application on the rezoned lands at An Bord Pleanála.

Meanwhile Bill Nolan is worried about John Gormley's plans to place a windfall tax of 80% on rezoned lands. We see it as a way of implementing the recommendations of the Kenny Report on Building land some thirty-five years after its publication. Mr. Nolan writes that that implications for the banking, property and planning industry may be far reaching. So they should be. Phil HoganTD from Fine Gael speaking at a meeting of Carlow County Council's Strategic Policy Committee has described John's proposals as "social engineering at its worst" and went on state:"I am sure the Minister means well but it reminds me of Soviet dictators."
Phil, business as usual is not an option. The laissez-faire approach that the two major parties have espoused has contributed significantly to the poor quality of development and planning that has left thousands of families flooded over the last week.

The Green Party is working hard in government to raise the bar for planning and development, and to tackle climate change. No-one ever said it would be easy.
Posted by Ciarán at 4:46 pm No comments: 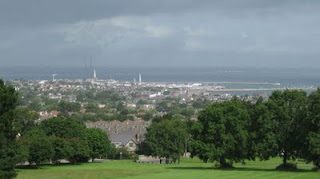 They're at it again: rezoning, that is.

Six months after the Green Councillors lost their seats on Dún Laoghaire Rathdown County Council the Fine Gael councillors are back to their old tricks. They're rezoning 30 acres of land of high amenity lands at Fernhill beside Three Rock Mountain for 660 houses. My view is that we've more than enough land zoning for housing already. Councillor-led rezoning became a debased currency a long time ago in Ireland.

You can get a good feel for what they're up to if you go to the Dún Laoghaire Rathdown County Council website. Click on 'Councillors', and then on 'Council Business'. If the 4th November 2009 link is still up there you can delve into the belly of the beast and determine for yourself whether you approve of the motions that the councillors have submitted. Motion number 221 is signed by two Fine Gael councillors and allows for the rezoning of lands adjacent to Fernhill Gardens at Stepaside. They're currently zoned for amenity and agriculture, and the Fine Gael councillors want to change that to residential. Mind you, Minister Martin Cullen said in a submission that he supported an arts cultural and heritage amenity facility there, but I'm not sure about his views on the rezoning itself though Cllr. Jim O'Leary feels that he's supporting it. If you go this page, click 'register' then search for 'd1393' in the search box here you'll find Cullen's submission.

Further down the road in Kilternan Councillor Tom Joyce from Fine Gael also wants to rezone twenty acres of lands at Droimsi from agriculture to residential, and I hear on the grapevine that at least one former senior Fine Gael figure is lobbying hard on these issues. Cllr. Joyce is also busy removing proposed rights of way for walkers from the Plan.

Not that Fianna Fáil councillors are above reproach either. While FG are trying to up the amounts of retail floor space in some shopping centres, FF are doing itelsewhere. Even independent Councillor Gearoid O'Keefe is pushing for the expansion of retail uses at Carrickmines, off the M50.

Meanwhile at last Wednesday's Special meeting of the Council to discuss the County Plan Cllr. Barry Saul from Fine Gael was calling the Sutton to Sandycove cycleway a 'sop to the Greens' and a waste of money, and Cllr. Richard Boyd Barrett voted against the proposal.

There were 269 submissions that referenced rezoning, and in the 433 motions from councillors that are tabled on the County Council agenda rezoning is mentioned dozens of times.

Everyone is pushing for the expansion of shopping centres in what they believe will create much-needed jobs, but there is little realisation that expanding the floor are devoted to shopping
does not in itself create sustainable jobs

I suspect if some councillors were to get their way it would be a recipe for suburban sprawl from the Three Rock mountain to Dublin Bay. In one sense it is an ironic reworking of the Council's motto "ó chuan go sliabh- from the mountains to the sea". Sprawl is bad for business, bad for job creation, and bad for the planet. We'd be better off building mixed-use well-planned walkable communities. My fear is that many of the Councillors don't realise that their actions will increase car dependency and leave families a long walk away away from public transport connections. It will also hasten the decline of established retail centres such as the town of Dún Laoghaire.

The Labour Party has taken a much more considered approach to the County Plan. Cllr. Niamh Breathnach and Cllr. Dennis O'Callaghan come out of this as well, as does Cllr. Aidan Culhane who is going down the path that I took fifteen years ago- he's studying for a masters in urban and regional planning at UCD while attending to his duties as a councillor.

Look, I believe that many of the councillors proposing rezoning motions believe that they are doing so for the greater good of the County, but I just wish they had a wider understanding of the principles of 'proper planning and sustainable development'. There's a series of lenghty Council meetings scheduled for the week starting 16th November 2009. We'll see what emerges.

Maybe we should borrow an idea from the UK where the Royal Town Planning Institutes runs a Summer School for county councillors that is held back-to-back with the annual conference for professional planners. I suspect both groups could learn a lot from each other.
Posted by Ciarán at 11:38 am 4 comments: