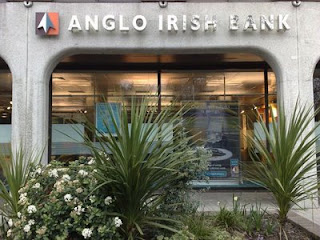 I must have missed it by minutes.

I had dropped the kids to school and peddled up to Stephen's Green to take a couple of picture of the front of Anglo Irish. Little did I know that the Guards were inside investigating suspected breaches of company law.

I guess you could describe it as some sort of reverse take-over when the the Guards rather than the robbers raid the bank.

The advertising in the window shows a Mastermind chair with the headline "Our chosen subject is savings". Given that the TV Quiz show's most well-known presenter was Iceland's own Magnús Magnússon I'm sure that there are some embarrassed faces in an ad agency somewhere. The small print on the Corporate logo reads "There is a difference." Damn right there is.

There's quite a few nuggets of information on Anglo's website including a Q and A on the Nationalisation process. Under the 'What triggered the nationalisation?" section (otherwise known as 'where did it all go wrong?') it states:

The funding position of Anglo ... progressively weakened over the past few weeks, and the ... unacceptable corporate governance practices that took place within Anglo ...caused serious reputational damage to the bank at a time when overall market sentiment towards it has been negative. The Government confirmed that the planned recapitalisation of Anglo announced on 21 December 2008 is not now the most appropriate and effective means to secure the bank's continued viability. Therefore, the Government decided to move to the final and decisive step of taking Anglo into public ownership.

Our Senator Dan Boyle was pretty outspoken in the Senate this afternoon. He feels that Fitzpatrick, Drumm and Bradshaw should be suspended until the investigations by the Office of the Director of Corporate Enforcement and the Financial Regulator have come to conclusion.

I had gone up to take a pic of Anglo to illustrate one of the few silver linings that might present itself to the side of the current dark cloud: Presumably much of Anglo's debt is tied to defaulting developers who have over-stretched themselves on land acquisition. If this is carefully handled it could allow the state to acquire significant land holdings that could be used to meet social housing and affordable housing demand for years to come.

Meanwhile, the lobbyists prowl the corridors of Leinster House. Tom Cullen from the SIMI seems to have spent the last two weeks drinking coffee with Fianna Fail back-benchers. He even claims that the Department of Finance now believe that a car scrappage scheme stacks up to create jobs. I'm not convinced. Our car fleet is young compared to the rest of Europe, and around half the carbon cost of a car is in its manufacture. I'm waiting for Tom to give me the figures.

My rant of the day is reserved for David Baddeley from Volvo Ireland. In his article in the Irish Times Motors supplement he believes that "Buying a car might actually put some people in a better financial position". This follows on from a paragraph where he states that buying payment protection insurance can address any concerns about possible redundancy. Have we learnt nothing from the boom? These type of advertorials in the motoring supplements mirror the excesses of the property supplements from the boom years that included ads for housing in Gorey Co. Wexford describing their developments as being within easy rail commuting distance of Dublin even when the first train didn't arrive in to Dublin till half ten.

My advice? Spend your money wisely. I'm banking on insulation. With the new grants coming on stream you can have a warmer home and reduce your fuel bills. There's also thousands of jobs, and a lot less carbon as the scheme is rolled out. My overview of the grants scheme is here.

Good luck with your spending!
Posted by Ciarán at 10:18 pm No comments: