A milestone on the Road to Equality 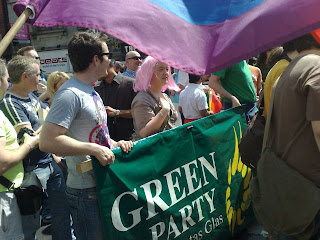 Sure, it's not marriage, but it IS progress.

The Programme for Government stated:

"This Government is committed to full equality for all in our society. Taking account
of the options paper prepared by the Colley Group and the pending Supreme Court
case, we will legislate for Civil Partnerships at the earliest possible date in the lifetime
of the Government."

We argued during the negotiations with Fianna Fail two years ago that the principles enshrined in the Green Party's policy document on Marriage and Partnership Rights should become law. Simply removing the references to gender in Irish law could have been a neat way of providing equality, but these matters are never easy. Instead reference was made to the Colley Report, and the legislation that finally saw the light of day in late June is expected to pass through the Oireachtas in the Autumn.

I sat on the All Party Oireachtas Committee on the Constitution for several years - the name of the Committee is enough to put you asleep - and in that time we discussed family rights at great length. I was taken aback by the conservatism of many Committee members in our deliberations. In particular when we got to talking about Article 41.3.1

"The State pledges to guard with special care the institution of Marriage, on which the Family is founded, and to protect it against attack. "

I argued that time had moved on, and that in an age when a quarter of births are outside of marriage we should protect the family, and marriage separately, but failed to get majority support. Along with Jan O'Sullivan and Arthur Morgan we proposed an addition that read

"The state also recognises and respects family life not based on marriage. All persons, irrespective of their marital status, have a right to family life. The Oireachtas is entitled to legislate for the benefit of such families and of their individual members.

However this wording was only included as a minority proposal, and hasn't moved forward. Social change often moves at a snail's pace within Leinster House.

One significant change that is included in the Bill, though is the cohabitation scheme. Dr. Carol Coulter called this "the most radical family law development since divorce came in" and Dr. Fergus Ryan has commented that this "represents real and substantial progress in the recognition and protection of non-traditional families." This provides automatic recognition of those who live together after three years (two if they have children together) and will allow qualified cohabitants (that's a bit of a mouthful) who are economically dependent on each other to apply for court orders if the relationship ends.

I had a good chat with Dermod Moore from Hotpress following the Bill's publication. He's mad as hell that my press release welcomed the Civil Partnership Bill, and that I see it as a step in the right direction.

I said to him what I've said to MarriagEquality: it is crucial that people lobby the conservative forces that exist in every party that are blocking equality if they wish to see further progress. Only one couple have sat down in my Constituency office, looked me in the eye and demanded full equality. I'd say to anyone that reads this post and that wants full equality, that they should sit down with at least one member of the Oireachtas in their office (preferably the more conservative ones) and explain what they want. Meeting a TD, or Senator face to face is the best way of changing their hearts and minds.

That having been said, I do feel that the appalling revelations in the Ryan Report, and no doubt in the forthcoming Dublin Arch-Diocese Report may encourage a fresh look at the strong Christian ethos in the Constitution, and perhaps move us further towards a secular State. Dermod also tweeted me the link to polls cited by MarriageEquality that show growing support for marriage for Gay and Lesbian people, so maybe the tide is turning.

There was a good group of Green Party members marching at Dublin Pride this year, (here's a clip I recorded) and I didn't see too much sign of representation from the two larger parties in the State amongst the ten thousand people that were there. We're proud of the progress that is contained within the Bill, and we expect it to pass through Committee later on this year.

We're still looking for full equality, and that won't happen overnight, but it will happen if you lobby your politicians.

I'd recommend the 'Take Action' page from Marriagequality as a starting point.
Posted by Ciarán at 9:48 pm 1 comment: