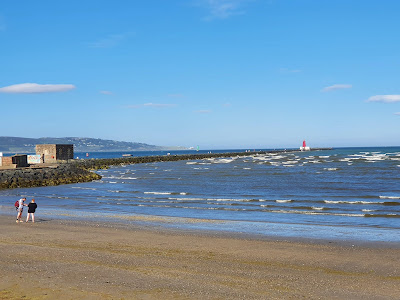 It's 8th August 2019, and we've had some heavy downpours in the last few days. Dublin City Council has spoken with HSE and EPA and is saying don't swim in Dublin Bay. That's good advice. For the moment don't swim. The Bay flushes out fairly quickly, so the next couple of days should see cleaner water, but there may be more downpours on 9th August 2019, so don't put on your togs just yet.

The current Ringsend Treatment Plant was commissioned in 2003 to serve a population of 1.65 million. It currently treats wastewater for the equivalent of 1.9 million people, that's 15% over-capacity. Just twenty years ago since the infamous ‘ship of shame’ MV Sir Joseph Bazalgette was taken out of service. It shipped our, eh shit to Howth.  Here’s an article by journalist Frank McDonald from 1999. Why Sir Joseph Bazalgette? One of my Victorian heroes, here, take a read…

It's worth noting that the European Commission has taken an infringement case against Ireland in relation to the Urban Wastewater Treatment Directive  Looking ahead, a big upgrade €400 million upgrade is on the way for the Ringsend Sewage Treatment Plant. The plans got the green light from Bord Pleanála back in April of this year. This means less no swim notices in the future and the works should be completed by end of 2021. A previous proposal would have involved a 9km pipeline out into Dublin bay. That’s where I got the notion of building a new island with the spoil, but I digress.

The current proposed upgrade will use a technology called Aerobic Granular Sludge. This is a new process (invented around 2005) that gobbles up the pollutants more quickly than the old plant. It means faster and less costly sewage treatment. Aerobic granules are a type of sludge that can self-immobilize flocs and microorganisms into spherical and strong compact structures. Sorry you asked? But these type of summer downpours represent a real challenge and can overwhelm any Sewage Plant. Will they be more likely with climate change? I suspect so.

We also need to separate out the storm sewers (rain water) from the ordinary sewers (poo) as currently in the inner city they both go into the same pipe, and that’s another challenge for @irishwater. As you can see this stuff interests me, I used to lecture in it at @WeAreTUDublin. Want to find out more? Check out two fascinating books by former Dublin City Council engineers Michael Corcoran and Clair Sweeney: 'Our Good Health' and 'The Rivers of Dublin'.

Posted by Ciarán at 6:42 pm No comments: