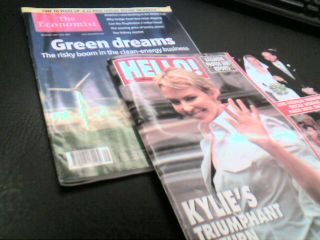 The Economist engages with environmental issues regularly, but it was last week's issue of Hello that took me by surprise. In their comment section they had writer Paul Brown engaging with the challenging issues of the day - Climate Change.

"Climate change has to be tackled urgently ... The days of making the School run in a 4 x 4 down crowded suburban side streets and taking cheap weekend breaks in Eastern European Cities are numbered."

Well, there you have it, if that isn't a tipping point I don't know what is.

The Economist piece was fairly positive as well, even if they did use a nasty variation of this pic of a fallen turbine in as part of their piece.

"Clean-energy fever is being fuelled by three things: high oil prices, fear over energy security and a growing concern about global warming."

Meanwhile our man Eamon Ryan is back from , leaving his blog behind him, I'll pester him to update it. Dick Roche didn't add much to the debate about Climate Change there. Interesting to see the Climate Change page on the Environment website was last updated three years ago. Now he's encouraging to exercise the "Borat Buyout". We're about to purchase €5m worth of shares in greenhouse gas reduction projects in countries like Kazakhstan. That probably beats buying carbon credits on the international market, but shouldn't we be investing in climate change reductions here at home such as public transport projects, renewable energy and better building standards?

There Are Reasonable Alternatives 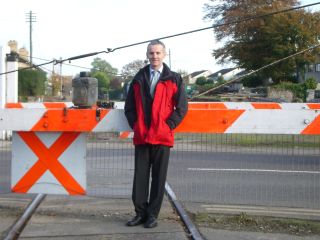 "" he said, "There are reasonable Alternatives." The speaker was Dr. Herbert Rauch at a conference on the theme of energy conservation that I attended as part of the Austrian EU Presidency.

I felt bad about the air miles, but I was at least able to point out to the attendees that the Austrian Parliament might consider changing to low-energy light bulbs in their Conference Rooms. I did buy some Carbon from Tony Lowes to salve my conscience for the travel to and from , though I'm not so sure that that's the best idea either.

At the moment it seems like Fianna Fáil is high on promises but a bit slow on the delivery end of putting back the rail link.

I told the protesters that had been a "holy place and a sacred space" for thousands of years. "Before Christ was born, was sacred. In the 19th century, was sacred, and in the 21st century we have to keep as a sacred place. I would be an act of sacrilege to drive a motorway through the Tara Skreen valley. It would be the most disrespectful act to our history, to our heritage and to future generations."

It's the eleventh hour at this stage, but moving the route is on the Green Party's shopping list for a Programme for Government. Well done to Rosaleen Allen and Heather Buchanan for organising the March.