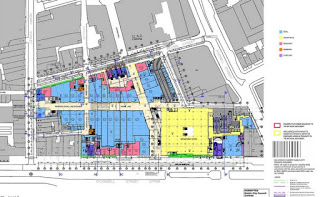 Dublin's Moore Street is in trouble. Shops have closed, market traders are facing competition and the plans for redeveloping the street are dated, damaging and dreary. On Monday evening the City Council is being asked to agree to a land swap that will allow the project known as Dublin Central to proceed. Plans for the comprehensive redevelopment of the two hectare site on the east side of Moore Street have been approved by Dublin City Council and An Bord Pleanála. The Council sees this project initiated by developer Joe O'Reilly and now facilitated by NAMA as a flagship project for the city.  The sweetener to the deal is that the O'Reilly's company Chartered Land proposes to restore 14-17 Moore Street where Padraig Pearse and Easter Rising volunteers retreated to from the burning General Post Office on O'Connell Street. He hopes to restore them for an ambitious deadline of Easter 1916. However the imposition of another soul-less shopping centre is too high a price to pay for a heritage centre.

O'Reilly's plans were first lodged with the Dublin City Council back in 2008 as the Celtic Tiger breathed its last. In keeping with the spirit of the times his company Chartered Land applied for planning permission for an over-sized shopping mall. It was to be thirteen stories high with five basement levels, and featured a dubious north facing Rooftop Park. Little attention was paid to the historic houses on Moore Street that featured prominently in the events of Easter 1916. Under successful pressure from historic groups the Government intervened, and the currently approved plans allow for the sensitive restoration of 14-17 Moore Street and 8 & 9 Moore Lane. However these buildings will be heavily overshadowed by new buildings behind them. In their planning decisions the City Council and An Bord Pleanála put some manners on the scheme and reduced its height and vulgar Celtic Tiger excesses. Nonetheless the overall development still involves shoe-horning a large shopping centre into a restricted city centre site with a large basement car park.  In essence it is a shopping mall with parking for seven hundred cars.

There will only be one shop facing on to Moore Street in the approved scheme. There will be no upper floor residential units over-looking this historic street. Most of the mall will open out on to Moore Lane, where presumable some of the existing cobblestone sets will be retained to lend an air of authenticity to the new shopping mall. It rivals the ILAC centre in its ambiance and architectural expression. This lane will be open to the public but protected from the weather with a rain screen. It is unclear how this area will be policed.

The approved plans feature a massive amount of car parking despite the current construction of a Luas line along O'Connell and Parnell Street. This means many more traffic will travel through already over-crowded streets. This seems to be at odds with Government's 2010 policy on Smarter Travel, but the plans were lodged before it was published.

The need for more housing is currently a burning issue, and it seems extraordinary that the development will only have a handful of residential units. An opportunity has been lost to seriously tackle the city's housing needs. These units will be located in the centre of the block and will not provide any additional passive surveillance of Moore Street or O'Connell Street at night when the shops are closed.


On Monday city councillors are being asked to smooth the development’s passage. It is proposed to sell the Dublin City Council cleansing depot at 24-25 Moore Street to the developer. That building would win no architectural prizes but will be demolished and be replaced by a ramp to the car park similar to the charmless Chapel Lane to the rear of the ILAC Centre. Just around the corner on the south side of O'Rahilly Parade the wall where Michael Joseph O'Rahilly wrote a last letter to his wife before expiring in 1916 will be replaced with switchboards and junction boxes. The battlefield site is not being treated with the respect it deserves.

Thirty years ago when Temple Bar was threatened by plans for a central bus station, artists and others protested and ensured that the area was protected by a Framework Plan that retained most of the older buildings. The area bounded by Moore Street, O’Connell Street and Parnell Street deserves a similar plan today. Such a plan could protect older buildings and shops, and could also provide room for new homes and businesses. Modern infill buildings could compliment the best of the past. Instead of facilitating this development I am hoping that my Council colleagues will turn down the land swap on Monday night, and force the developer back to the drawing board. Almost a hundred years ago a new republic was declared on O'Connell Street. If they were alive today I suspect few of those who fought for Irish freedom would welcome another shopping mall onto the sacred ground where they breathed their last.