Batten down the hatches 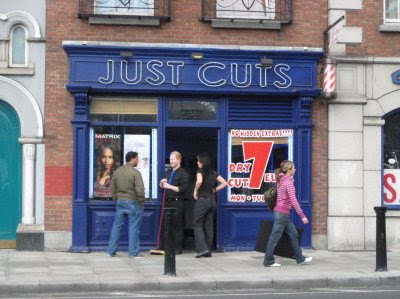 The next few weeks aren't going to be easy.

The news from the exchequer isn't good, and my pal in Finance says there's more to come. He reckons it'll be 10% cuts all round by the end of the year in order to fill a six billion hole in the coffers. Stamp duty has flat-lined, corporation tax is down, construction receipts are a fraction of their former levels, and retail's looking shaky. Sure, there's still companies moving to Ireland, but you've got too distinguish between the brass plate operations and the operations that bring long term jobs and income to Ireland. Some of the new jobs will come from unusual places. Facebook is contemplating setting up operations here, and the new Irish Mind Series on CNBC is making a pitch to the United States on the added value of Irish education and upbringing on how we work. The massive expansion in access to third level in recent years is breathtaking, but there's concerns out there that quality could suffer as quantity of output increases. I heard rumours recently that they've brought in attendance rolls in some courses in UCD to keep tabs on whether people are making along to lectures that they're taking exams in.

Meanwhile the squeeze is on for various State agencies. Fine Gael's Leo Varadkar (not someone I'm always in agreement with!) brought out a report 'Streamlining Government' in April that has some reasonable suggestions for rationalising the plethora of semi-state bodies. Over the weekend Minister of State for Trade John McGuinness has been making waves with his thoughts on the public service. Some time ago I threw my hat into the ring with an article that you can find here. David Connolly from the Dublin Inner City Partnership didn't agree with some of what I said, and penned his response here.

Five years on I feel more strongly than ever that we need to give real power to local authorities, rather than spinning it off to external agencies, and I worry that we've reduced local government to an exercise in oversight, regulation and enforcement in so many areas. In other countries I suspect that enterprise, development and support to the unemployed are closer to the core competencies of local government than in Ireland.

Since the early nineties we have created a plethora of new bodies: County and City boards that support the start-up & development of local business in ;County and City Development Boards that are charged with bringing an integrated approach to the delivery of both State and local development services at local level; and Local Partnerships that respond to long-term unemployment and socioeconomic disadvantage.

Meanwhile within local authorities we've put in place Strategic Policy Committees that are supposed to assist the Council in the formulation, development and review of policy, yet so many of what should be core functions have been spun off. It is no wonder that so many councillors have resigned in recent years. I suspect many have become disenchanted with the rising tide of representations, a salary that fails to reflect the workload, and perhaps most of all a frustration at becoming increasingly distanced from key decision-making functions. I wouldn't abolish City and County Development Boards, Enterprise Boards and Partnerships, they all do good work but I would like to see their work more strongly tied into the heart of local government.

RAPID and CLÁR complicate matters even further. Again they provide a variety of useful funding in targetting graffiti, providing childcare and accessible transport, but perhaps these issues should be core competencies of local government rather than dispensed from on high? RAPID funds everything from estate management, traffic safety and measures that improve equality for women. The lead Department is Community, Rural and Gaeltacht Affairs there and to be honest while I'm grateful for the emails that announce every details of Éamon Ó Cuív's latest disbursement of €1,050 to the North Mon Taekwan-do club in Cork, I'd be happier if the money came directly from the local Council. It has got to stage where you'd almost need a Masters in Community Development to start looking for a grant for traffic calming and that's not the way it ought to be. As a side-bar issue I'm also nervous about the designation of 'most disadvantaged' to particular communities, as it immediately begs the question 'are you in or are you out?'. A sliding scale might be more appropriate.

Proper financing for local government is a crucial issue. The current system whereby local authorities must go cap in hand to central government for any significant capital project is demeaning and over-centralised. The 2006 Indecon Review of Local Government Financing suggested that more financial autonomy could be beneficial, and the more recent Green Paper from the Department of the Environment, Heritage and Local Government "Stronger Local Government - Options for Change" referred to the this challenge. Apparently now though, we'll have to await the deliberations of the Commission on Taxation.

It is amazing how many people feel that the abolition of domestic rates back in 1977 was the nail in the coffin of independent local government. Its the only tax I know that people feel nostalgic about at the doosteps. As a fellah in the Liberties said to me many years ago, "If you didn't like what they were doing with your money you could go down to City Hall and give the councillors a piece of your mind".

Given that stamp duty on property exaggerates the cyclical nature of the property market, we might be better off abolishing it altogether and replacing it with an annual charge on residential property that reflects its floor area and the number of residents. This could allow people to move more easily to the type of property that best reflects their needs without penalising them for their decision to move. If your job was fifty miles away you could move there, and if children came along you could move again without attracting stamp duty that can hit between six and nine per cent each time you move property. It could cut down on commuting and allow people to live in homes that best reflects their needs at each stage of their lives. Certainly some alternative to the complexities of the current system would be welcome.

Meanwhile Philip Boucher-Hayes's Future Shock programme on the issue of water gave stark insight into how bad planning and a lack of capital funding has led to a run-down water supply system. I missed the original screening, and my Real Player jammed at the thirty minute mark, but I think I got the main thrust of it by the half-way mark. Again financing featured as an important issue. John Gormley has ruled out blanket water charges but I'd certainly feel if people are watering their half acre of lawn or wahing the car every week then they should pay some sort of charge for excessive useage. I'd hate to see a pipeline to the Shannon or Boyne just to ensure someone's 08D is sparkling, but perhaps we should be putting more attention into protecting and increasing the watersheds that we have in the vicinity of Dublin. Curiously enough, perhaps New York could be looked at as a city that has a decent tradition of managing their water resource.

It's not a great time to be talking about local government reform and financing when the purse-strings are tightening, but perhaps at a time of fiscal restraint we should be discussing what we really want our local councils and councillors to be engaged in doing on our behalf.