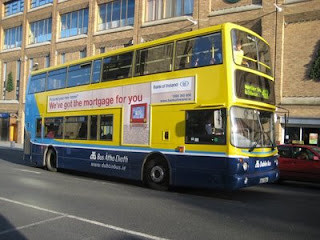 Busy times within the Green Party, with Bronwen Maher and Chris O'Leary's resignations. Anyway, I just thought I'd post the full text of the article that I submitted to the Irish Times which appeared as an opinion piece today...

...Dublin Bus requires radical reform to meet the needs of bus users. The company made a profit of €4.7m in 2007, but lost €10 m last year and will lose €31m this year unless action is taken. The company has to avoid haemorrhaging cash. Last week senior management chose the easier option of service cutbacks instead of the substantial reforms required to modernise the company.

Bright yellow buses and customer charters play their part, but the brand must be built on reliability, efficiency and punctuality. Buses play a valuable transport role and help cut carbon emissions but until they are a more attractive option Dublin Bus will continue to struggle.

A decade ago, disagreement over opening the centre doors led to a protracted row between management and unions. Rather than resolving the issue, new buses were ordered without centre doors. Ultimately bus users lost out by waiting longer to board and disembark. It seems that if there’s no easy answer proposals are quietly shelved.

Reforming the bus network is the main area where changes must occur. Although most quality bus corridors are successful, many routes meander around the city discouraging prospective passengers. The number seventeen takes an hour and twenty minutes to travel from Blackrock to the terminus in Rialto. En route it travels six miles to reach Dundrum, a journey of only three miles as the crow flies. More direct routes would attract more passengers from their cars.

The Dublin Transportation Office has computer modelling that show the origins and destinations of the journeys that Dubliners make. This information should be used to transform Dublin Bus’s routes into a clearer network that better serves the city’s needs.

More cross-city routes are required to allow passengers to benefit from faster journey times without having to transfer from one bus to another. The city centre would then benefit from less parked buses.

Too many Dublin Bus routes clog O’Connell Bridge rather than using other Liffey crossings. The network should be more like a spider’s web with easy transfer between routes where they intersect.

An over-supply of bus stops also complicates matters. There are five bus stops on the Monkstown road in South Dublin. Placing bus stop every 250 meters slows down buses. Less bus stops might add a minute or two to the walk to the stop, but would reduce bus journey times.

Consultants Deloitte are reporting to the Department of Transport on proposals for the CIE group, and no doubt have suggestions for Dublin Bus. This has happened before. In the early 1990s a report by the Dublin Transportation Initiative called for real time passenger information and integrated ticketing. Fifteen years later we are still waiting. In London an Oyster card the size of a credit card allows public transport users to transfer effortlessly between buses and the underground. Heads should roll in organisations that have delayed the roll-out of a similar system in Dublin. In London the Mayor chairs Transport for London, and something similar should happen here when we directly elect a Mayor.

Dublin Bus has erected signs on their bus stops stating when the bus should leave the terminus. Instead, they should inform you when buses will depart from the bus stop, as is common abroad. In other cities, buses pause for a moment along their route if required in order to stick to schedule. The increase in reliability would offset any increase in journey time and reduce the tendency of buses to travel in packs.

Dublin Bus ticket types offers forty different types of pre-paid tickets and nine different prices on board. Perhaps a €1, €2 or €3 fare on board, or eliminating on-board cash altogether would speed up boarding times, and make life easier for all.

Drivers could benefit from further training to better serve the needs of passengers. A costly kerb replacement system has been provided that permits level boarding. However drivers often fail to pull in to this kerb, making boarding difficult for parents with young children and the elderly. Gentler breaking and acceleration would also make buses more attractive.

A free bus map would help. The printed map of the Dublin Bus network costs €3 and is hard to obtain. A ‘London Underground’ style of map showing all public transport including Luas and rail would attract more users. The Dublin Bus website is searchable by bus number and destination, but it is left to a private site www.justroutes.com to permit you to chose your destination as well as your starting point, and find the bus you need.

Better bus priority measures in the city-centre and on the approaches to the M50 are crucial. Four lanes of car traffic are allowed through College Green and thus it can take half an hour to get by bus from Mountjoy Square to Stephens Green. Local authorities have to play their part in speeding up buses, and that requires political leadership. Taking cars out of College Green and a South Quays bus lane are required.

Dublin Bus should relocate many depots that occupy valuable land close to the City Centre. Depots should move close to the M50 allowing land at Grand Canal Dock and Mountjoy Square to be better used, and release equity for the company’s development in future years.

Dublin Bus can and must embrace sweeping changes. In the coming months the Government will publish legislation to modernise bus regulation that dates from the 1930s. However the company must also undergo substantial reform to reflect the needs of the city in 2009.

Ciarán Cuffe is the Green Party’s Transport Spokesperson and TD for Dún Laoghaire
Posted by Ciarán at 1:09 pm 16 comments:

Shooting Fish in a Barrel 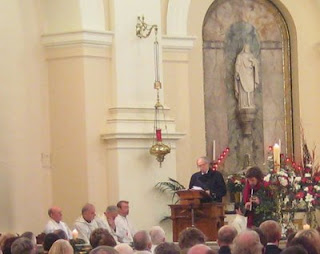 "Tony would want us all to be mindful of the Palestinian victims of the brutal Israeli aggression . . . in Gaza."

The words of Tony Gregory's brother Noel set the tone for an amazing send-off of the TD whose office was across the corridor from mine in Leinster House. Liam Ó Maonlaí underlined Noel's words with music in St. Agatha's Church. Fr.Peter McVerry paid eloquent tribute to a fellow-campaigner, and Cllr Maureen O'Sullivan spoke passionately about Tony's many and varied interests in life.

Tony was not a man to suffer fools gladly, unlike so many of those who have occupied a Dáil seat, and I'll miss the sound of his voice in the Dáil chamber, and from the office across the way.

He understood the system backwards, and as the leader of the technical group in the Dáil (which include the Greens) for the five years between 2002 and 2007 he ensured that all of its members were well represented.

Meanwhile in Gaza the murder continues. There is evil on all sides, but the murder and bloodshed of the Israeli army over the last two weeks beggars belief. Any sense of proportion from the Israeli Government has been thrown out the window, and this is like shooting fish in a barrel; it is a bloodbath. Withdrawing the credentials of the Israeli Ambassador to Ireland has been suggested, but perhaps sanctions against the State of Israel would send out a clearer message that would hurt economically.

The timing of the Green Party's members' conference and Green Economics Seminar in Liberty Hall clashed with the Palestine March in Dublin last Saturday, but I headed out early from our meeting, with some colleagues from Northern Ireland to join the start of the march outside the Central Bank. We spoke as we walked up the Quays, and agreed that the actions of the Israelis were akin to the British Army reacting to IRA attacks by taking it upon themselves to bomb all nationalist areas back into the Stone Age. The timing is so cynical, in the interregnum before Obama takes office, and in the midst of an election campaign in Israel.

Reuters reported last Friday that the US was hiring a ship to bring hundreds of tonnes of arms and ammunition to Israel from Greece, including bunker busting bombs that can blast through eight metres of reinforced concrete. The figures speak for themselves: this evening the BBC reports 910 killed in Gaza including 292 children. Israel says 13 of their citizens have been killed.

Joe Sacco's graphic novel Palestine from the early 1990s paints a vivid picture of everyday life for ordinary Palestinians. Not much changed in the years leading up to the current conflic . His perspective is miles apart from the New York Times's reporting of the conflict, and illustrates the huge difficulties that ordinary Palestinians face. Of course the appalling actions of Hamas have also led to the loss of innocent lives, and deserve condemnation, but the disproportionate response from Israel is murderous and cannot be justified.

Hopefully Tony Blair's efforts can help bring all sides to agreeing a new cease-fire, but in the meantime some form of sanctions against Israel is required.
Posted by Ciarán at 9:14 pm 1 comment: