An absentee ballot for Obama 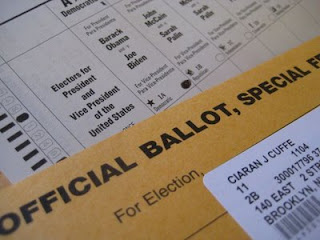 The die is cast, in my case anyway.

I posted off my absentee ballot two weeks ago, and hope that it'll get there on time.

I've read the books, 'Dreams from my Father', the 'Audacity of Hope', and I'm hoping Barack Obama gets in.

Of course I'm also hoping for good things from the US Green Party candidate Cynthia Ann McKinney and her running mate 'hip hop' Rosa Clemente, but I'm not expecting too many surprises. Ralph Nader is also on the ticket again, as Peace and Freedom Party candidate, along with running mate Matt Gonzalez from San Francisco. It's an uphill struggle, being green in a country that is dominated by two large political parties, and I can only imagine the challenge in the US.

It was interesting being in studio in RTE this morning in the presence of American economist and Obama advisor Robert Shapiro. His view is that McCain has only a 2% chance of winning. I only hope he's right, certainly Pollster.com seems to be agreeing with him this morning. He was in town for a conference on foreign direct investment in UCD , and he was upbeat that our
highly educated workforce, state of the art infrastructure (his words, not mine!) and local demand in the EU for goods from US subsidiaries here would help pull us through. McCain has been repeatedly citing Ireland's 11% Corporation tax (it's actually 12.5%) versus 37% in the US as part of his campaign, so it was reassuring to hear an economist with a Harvard PhD be so upbeat.

I was in studio to discuss extraordinary rendition, and last week the Government set up a new Cabinet Sub-Committee to discuss, as it was rather delicately put 'Aspects of International Human Rights'. The bottom line is Gardaí on planes, and I think that is what we'll get.

One of the first pieces of paper on the desk of the winning Presidential candidate will be a letter from the Irish Government stating our opposition to extraordinary rendition, the detention facility at Guantanamo and intensive interrogation techniques such as water-boarding which are internationally considered to constitute torture. I hoping that we'll be the first European country out of the traps on that one.

There's also an intention to strengthen the legislation on search and inspection of aircraft, if required, and the Gardaí will be asked to keep the Committee briefed. In addition the Minister for Justice will update the Committee on steps taken to give effect to the Human Rights training as outlined in the Programme for Government. I'm hopeful that this represents some progress in the right direction.

My fingers are crossed for Tuesday night!
Posted by Ciarán at 9:27 am 21 comments: