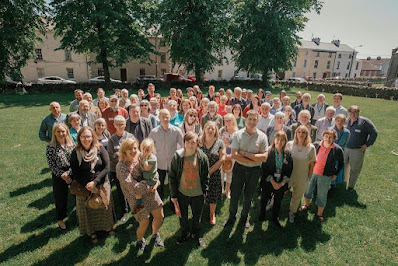 Let's take a moment to look back.

In 1982 I was a teenager, and I read a column by Michael Viney in the Irish Times where he talked about:
“A storehouse economy, non-exploitative approach to nature, land reform, human-scale institutions, alternative technology, a basic, unearned income for all, and the decentralisation of political power.”

That column led to me joining the Green Party, and attending the first Convention in the Glencree Reconciliation Centre where we agreed our founding principles forty years ago. . My memories of the early days included Esperanto, Basic Income, Acid Rain, our cold damp office on Stephen Street, and then Fownes Street. I remember canvassing for Liam de Siún in Bray in the early 1980s. Back then people left their front door key in the lock on the outside of the front door. Times have changed! I remember Ubi Dwyer storming out of our first convention in Glencree  because some of us had driven there; Maire Mullarney on the Late Late Show, extolling home schooling; Roger Garland keeping Ireland open, and having rows with rural Fianna Fáil TDs; Patricia McKenna annoying the establishment; John Gormley criticising Bertie Ahern on his use of the Government Jet. We still have rows, with others and within!

On reflection I feel we spent too much time railing about what we were against, rather than promoting what we were in favour of. People need a vision to believe in, as well as problems to oppose. So let’s look ahead:

We need to be more propositional, rather than oppositional. We need to get out of our comfort zone, rather than cherish the comfort of like-minded people. We need to check our privilege, and remember that Ireland is one of the wealthiest nations

There’s a few awkward truths we also need to confront. Covid vaccinations rely on the extraordinary advances of modern medicine. Nuclear energy is keeping the lights on in France and other countries. Ukrainians want weapons to fight an evil invasion

I don’t want to suggest that we need to drop our commitments to preventative healthcare, to clean energy, or to peace, but we must accept that what we hold dear is not necessarily held dear by others and we must respect that.  Looking ahead: We need to be a stronger voice for women, for children, for minorities, for marginalised communities and for those less privileged than ourselves. We must be  known for our leadership and vision, rather than our dissent.

We should look to our German, our Austrian, Finnish and Swedish colleagues. We should listen to the concerns of young people advocating change. We need to seek out, listen to, and learn from dissenting voices.

We must work across political divides. It is what I learnt from the Council chamber, but it took me 20 years to learn how to do so. That’s what I now do every day in the European parliament in order to achieve success.

To succeed in the next 40 years we need a better gender balance. We need to be more inclusive of all communities, and I applaud the work of Roderic O’Gorman  and Joe O’Brien  on this. We need more coherent economic and social narratives. Sure, we favour basic income, but then what? We need to have more to say about big data (thanks Ossian), and small businesses, about start-ups and innovation. We need to have more to say about cities, and about towns, and Malcolm Noonan and others are making this happen

To suggest 40 years ago that there were natural limits that we had to live within was radical. It is now generally accepted. What we then called alternative energy is now mainstream. The European Green Deal has been endorsed by the vast majority of European public representatives, and this is what Grace O’Sullivan and I are legislating for in Brussels.

In 1990 John Gormley published a Green Guide for Ireland. He asked whether being green would involve a return to a harsh and spartan existence. In reply he wrote that “We are at a stage of human development where we can combine the technology of the new with the wisdom of the old to make for a better world.” John’s words were prescient then and are relevant now.

Over the next forty years we must change. We require a relationship to the land that replenishes and rejuvenates the soil. We must produce, store and utilise clean energy for everything that we do. We must retrofit our homes to be powerhouses that keep us safe and secure. Our neighbourhoods must be safe and easy to get around for the young and not so young. We must reclaim our streets from the tyranny of car dominance and allow public space, and life to flourish. We must cherish biodiversity, and work with all on protecting our climate. Back then we said that the poverty of two-thirds of the world’s family demands a redistribution of the world’s resources. This is still the case.