Spreading from the west... 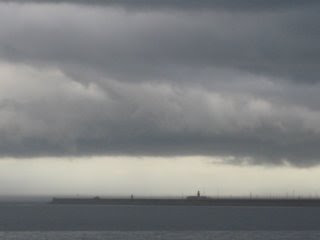 'It is certainly a matter for regret that the climate of these northern regions makes it so uncomfortable to get wet and so difficult to get dry.

The clothes which the prevailing temperature compels us to wear are even in the summer of a thickness which renders them capable of absorbing a vast amount of water , and the air is of a dampness which slows up evaporation and so keeps them wet.

Not but that I think Ireland has a worse reputation as regards weather than she deserves. Rain is frequent, especially in the west, but seldom lasts long . A whole wet day is rare.'

Robert Lloyd Praeger 'The Way that I Went' 1937


...And he was someone who knew his way around the Country.

I look out of the kitchen window every morning to see how many inches of rain there are in the wheelbarrow, just to get a steer on the day ahead. Whatever way you look at it, it is depressing. Still, it could be worse, you could be living in Carlow and find that your brand new apartment block is flooded. It was good to see John Gormley pay a visit down there today.

The new draft guidelines for planning authorities on sustainable residential development in urban areas from last February states: " ...Fundamental questions to be addressed at the outset of the planning process include: ... The avoidance of natural hazards such as flood risk, and avoidance of increased flood risk for downstream areas."

Hindsight is a wonderful thing, but it appears clear that more extreme weather events such as flash floods are part of what climate change may bring to Ireland. Rapid urbanisation has led to a lot more tarmacadam and concrete out there which increases the risk of flooding due to run-off from non-porous surfaces.

Flooding.ie is a font of knowledge, but I'm not quite sure if I would have the presence of mind to consult 'My Family Flood Plan' and ensure that I 'harvest any crops that can be ripened indoors, such as tomatoes' or empty any petrol lawn mowers before the water rises.

I also wouldn't be exactly comforted by clicking on the 'A flood is coming , what do I do' link and finding a page that does little more than remind me that 'Floods are the most common and widespread of all natural disasters.' Note to webmaster: check those links!

Floodmaps.ie is more technical, and includes mapping for your own area with local authority reports on flooding, press coverage of flooding events and even that famous photograph of Bertie NOT walking on water (under the Drumcondra 2002 section.)

Someone also suggested to me that the flooding from the Maretimo Carysfort stream in Blackrock last year came soon after the clear-felling of forestry on the side of Three Rock Mountain. There is a very detailed annotated map prepared by Dun Laoghaire Rathdown County Council on floodmaps.ie with hand-written notes that highlight areas vulnerable to flooding, but floodmaps.ie isn't great for links. Try Blackrock, County Dublin, and open the report on 'Flood Event: Hyde Park Gardens Recurring'.

Ideally all Development Plans should be underpinned by this historical knowledge, and planning authorities should ensure that land use zoning don't allow for development on land that has been repeatedly flooded unless there are compelling reasons for doing so.

Perhaps developers should underwrite the first twenty years of flood insurance with any property that they sell. That would put manners on any cowboys that there might be out there.