Boys and Girls in Blue 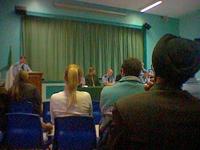 Finally got the opportunity to spend a day in Templemore at the Garda Training College. "In Scientia Securitas" is the motto - "In knowledge, safety." Met briefly with Chief Superintendant Kieran McGann who runs the show. It was Minority recruitment day yesterday, and Muslims, Sikhs, and Travellers were listening to the sales talk.

Human Rights are on the curriculum, but there's a long way to go to reform the Gardai as the drip-feed from the Morris Tribunal in Donegal continues.

One step would be to publish and revise the Garda Code. It is by all accounts an antiquated document that bans members of the force from living within ten miles of a relative, or spouse's relative! It also, rumour has it, bans the keeping of chickens by members of the force.

I met Sargents Michael Byrne and Sara Moylar who are working with the Human Rights Initiative. Not an easy task to adapt the force for the challenges of policing a new Ireland. Perhaps some mechanism can be found to place part of the training (perhaps a law module) within another third level Institute so that recruits are exposed to other students in a learning context.
Posted by Ciarán at 3:03 pm No comments: 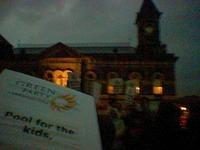 Some good news from the October County Council meeting about the Dún Laoghaire Baths. Eight options were presented to the Councillors ranging from grandiose plans, to the option of demolishing the existing derelict Baths buildings.

At the meeting on 10 October the Council dropped the proposal that involved building apartments and super-pubs on the site. Instead they have set up a committee of councillors from Dún Laoghaire to look at the remaining proposals. The Green Party would have preferred a clearer decision, and we put forward our own proposal as follows.

“That development proposals be prepared for the Dun Laoghaire Baths site along the following lines:

§ Provide a publicly owned swimming amenity fully accessible to the general public,
§ Provide a new building of no more than 2/3 storeys, in total, containing an indoor heated 25m pool,
§ Provide a small number of related amenity elements including, for example, a toddlers’ pool, sea-weed baths, gym and modest café/restaurant with viewing area,
§ Provide other appropriate cultural facilities in keeping with character of the town of Dún Laoghaire.
§ Renovate and re-landscape the existing walk-ways and maritime gardens between the Baths and East Pier in an environmentally sustainable manner and without any interference with the existing coastline beyond that absolutely necessary for the protection of the leisure amenity: and that the Manager prepare funding options for the proposal, and provide bimonthly updates to the Council on the issue.”

This plan would cost between ten and twenty million Euro to build. However the Council is also moving ahead with the Monkstown ring road, which will cost thirteen million Euro. We feel its time for the Council to change its priorities. They should build the pool instead of the road.

There was a carnival atmosphere as residents protested outside the Council chamber on the night of the Council Meeting. It was a clear success for people power.
Posted by Ciarán at 5:28 pm 2 comments: