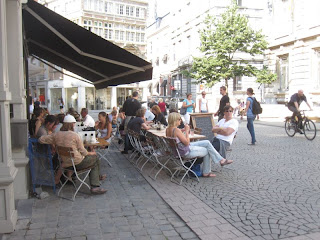 Polish washing machines, that's what it all boils down to.

I was in Ghent in Belgium, at an informal meeting of the European Union's Environment Council. We were there to discuss waste policies and climate change. Specifically we were discussing Sustainable Materials Management (SMM), one of the themes of the revolving six month presidency of the European Union currently held by Belgium. Interestingly the regional government of Flanders is leading the Belgian Presidency, and the discussion was capably led by Minister Joke Schauvliege, Minister of Environment, Nature and Culture.

Increased use of virgin materials can clearly have a negative effects on the environment, so the EU is teasing out how to ensure that we make best use of raw materials and concentrate efforts on stimulating markets and product design from what we now consider waste materials. In Ireland the www.Rx3.ie initiative is funding research in this area. A key question is how can we maintain the natural capital and reduce environmental impact through the entire life cycle from extraction through consumption and production to waste processing. It was refreshing to see issues such as eco-design receive substantial discussion.

The discussions were assisted by a working paper derived from a study by Sustenuto, KULeuven and Wuppertal entitled "Sustainable Materials Management for Europe: from efficiency to effectiveness". There's been three shifts over recent decades, beginning with the 'reaction' phase of applying end-of-pipe solutions to pollution difficulties. That's been replaced in recent years by 'redesigning', informed by life cycle assessment that closes the loop. Looking ahead a focus is beginning to emerge on 'reframing' which involves a systemic change to an integrated closed cycle to address materials use, and ambitious task.

I was delighted that the book "Cradle to Cradle -Remaking the way we make things" by McDonough and Braungart figured high in the discussions. The book itself illustrates that "C2C" step change. It is printed on polypropylene - the same material as yoghurt containers and is eminently recyclable - so much for the "dead tree" media!

Jacqueline McGlade, the head of the European Environment Agency presented a paper on "The necessity of managing resources sustainably", pointing out amongst other things that we're becoming increasingly hooked on the "anthropogenic" metals. Essentially if it flies or you talk into it, it probably contains rare-earth metals such as Cerium, Terbium and Lanthanum that are hard to find and extract. She also spoke about the use of social media in strengthening feedback that reinforces scientific observation. As an example after setting up a SMS service to warn subscribers of high levels of ground level ozone, the agency found that subscribers texted back health concerns before the instruments picked them.

Dr. Stefan Bringezu from teh Wuppertal Institute spoke about "Strategies for Economy-Wide Sustainable Resource Management" and spoke about the need to monitor and control the "Big Three" - Greenhouse Gas emissions, Mineral extraction and Global land use.

In the final session on Tuesday we discussed progress on climate change. There was cautious hope that the talks next December could be a milestone on the way to a strong agreement in South Africa in 2011. However in the meantime lots of work has to be completed on Land Use, Land-Use Change and Forestry (LULUCF), Assigned Amount Units (AAUs) notably the 'hot air' credits or emission surpluses from Eastern Europe and former Russian States, and fast-track financing promised under the Copenhagen Accord last December. Progress is also required on Measurement, Reporting and Verification (MRV). I was glad to hear the new UK Government highlighting the need for rapid transition to a low-carbon future. All agreed that movement over the next few months is crucial so that some of the lifting can be done in advance of the December talks this year. Certainly the position will be clearer by the next formal Environment Council on 14 October 2010.

Looking back I believe it is important that the EU looks outwards and ensures that bilateral discussions with other Global players ensure that we're not squeezed out of the discussions at future talks, as we were last December. Perhaps we need to forge an alliance with the African States, or move ahead with India in advance of the talks later this year.

Oh, the Polish washing machine? Well, the Polish Environment Minister Andrzej Kraszewski mentioned that his washing machine has lasted for thirty-five years, unlike modern machines that seem to have a planned obsolescence of six or seven years. He also produced a graph to show that energy and water use in more recent models had declined dramatically. Therein lies the challenge, striking the right balance between all these factors was at the heart of our discussions. We didn't resolve the issue, but it did lead to a lively debate. It was an easier topic is some respects to deal with compared to the amount of yellow cards given out to the Dutch team during the World Cup last Sunday. That's a topic that could easily occupy an entire EU Summit