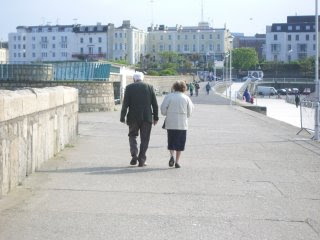 That's the only word I can use to respond to the hurt and difficulty suffered by so many older people and their families over the last week.

The changes announced this morning (Tuesday 21 October 2008) have involved raising the income limits to €700 per week (€36,500 pa) or €1,400 per week (€73,000 pa) for a couple. Older people on this income or under will receive a full medical card. In addition, those with incomes above the threshold experiencing difficulty in meeting their medical needs will be eligible to apply for a medical card under the discretionary medical card scheme.

A huge amount of the debate in my head has been about means testing. Just what should the State provide to everyone, regardless of their income or assets? Whether we like it or not, that answer has to change, depending on the state of the economy.

One thing is certain; this is only the beginning of a huge challenge to tackle the economic difficulties of Ireland Inc. There may be a ten billion hole in the finances, and the hundred million euro mentioned in the context of medical cards is perhaps only 1% of the gap in the nation's finances that will need to be filled in the near future.
It begs the question as to whether we should continue to provide tax relief at source on mortgages and also on private medical insurance. The sooner we have a full reality check on the state of the nation’s finances, the quicker we’ll recover.
People have remarked on Brian Cowen’s ability to hold the line in the past, but this issue was different. This was unscripted, un-choreographed and straight from the heart. Many of the phone calls and emails have been from people who had difficulty sleeping since Budget day; people who have a State Pension, and sometimes only €2500 or even under €500 a year on top of that. Ironically, many women have small pensions because they had to leave their jobs due the marriage ban and only returned to work when that was reversed. That means they only contributed to a private pension for the last ten or fifteen years of their working life. Their pensions are small, and their fears are real.
I hope that today’s changes go some way towards meeting their concerns.
Posted by Ciarán at 12:04 pm 18 comments: 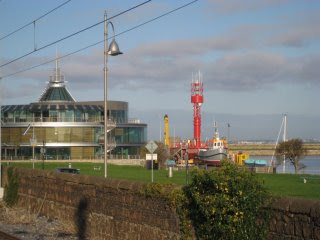 From Bentley Villas to the Irish Lights, a shot of architecture is coming to Dún Laoghaire.

Open House is an initiative of the Irish Architecture Foundation, and it consists of a weekend festival where all sorts of buildings throw open their doors and allow people to walk through buildings that aren't always open to the public.

This is the first year that Dún Laoghaire has been included, and there's a mix of projects on view. The Commissioners of Irish Lights Building (pictured here) will be flying the green flag with its heat pump and solar panels, but you'll be able to visit the snazzy new community centre at St. Paul's Church on Adelaide Road, just a short walk from Glenageary DART Station, as well as the restored Harbour Lodge on Crofton Road next to the County Hall on the Marine Road. There's full details on the Architecture Foundation's site, a nice use of flash on the site.

There's also some interesting material on the Culturestruction website, such as the colouring book for children by Eilis McDonald. Click by, it's worth a look. The screening of Luastube in Temple Bar also sounds intriguing

On Thursday night (16th October 2008) at 6.30pm there's a debate chaired by John Bowman in the Liberty Hall Theatre with the topic "Has Dublin Changed for the Better?". I'll be speaking, along with Senator Ivana Bacik, Entrepreneur Jay Bourke, Dublin City Architect Ali Grehan, Artist Jesse Jones, Architect Grainne Hassett, and others. There's no admission charge, and no booking required, so you've no excuse not to come along. Between the Budget and the state of the banks I may have switched sides of the debate several times between now and Thursday.

Hope to see you there.
Posted by Ciarán at 11:55 am No comments: 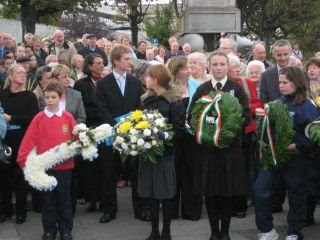 Fr. Mangan had the best line in St. Michael's Church this afternoon.

"We'll have a collection now, for the banks."

It brought the house down. It was a touch of levity at a poignant occasion, the 90th anniversary of the sinking of the RMS Leinster, the old mail boat. 501 was the official death toll, but it was probably higher than that. It was the greatest ever loss of life on the Irish Sea and it occurred just a month before the First World War ended.

There were familiar faces at the commemoration, and many had lost a grandparent or some other family member in the tragedy. Saddest of all was the mention of the postal sorters. They hadn't a chance - sorting the post below deck, many of them would have died instantly when the torpedo hit. They were four miles east of Kish lighthouse at the time, and although Captain Birch ordered a 180 degree turn in the rough seas a second torpedo led to the ship quickly sinking. He was injured in the attack and drowned when his lifeboat foundered.

The U-boat UB123 that fired the torpedoes never made it back to Germany. Commander Ramm and his crew perished in a North Sea minefield a week after the Leinster sank and thirty six more lives were lost. They too were remembered today.

After the inter-faith ceremony we marched down to the anchor monument on the Queen's Road and wreaths were laid by schoolchildren.

Meanwhile the world's stock markets have had one of their worst weeks on record. It makes matters all the more challenging for Brian Lenihan and the rest of the cabinet as they prepare for a tough budget on Tuesday.

"Bheidh an cáin fhasinéis ro-dheachair" was the view of our Oireachtas Irish class this week. The budget will be tough, and that was before this weeks downward slide of the world's markets.
Posted by Ciarán at 5:10 pm No comments: