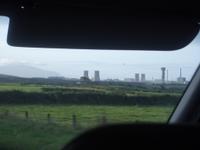 Sellafield 20 September 2005. Lots of stiff upper lip and asssurances that things don't go wrong. As it happened they did inform us that there had been a leak a couple of days previously that was being attended to. However it wasn't so much of an 'incident' as an 'event'. Anyway it was in a sea discharge pipe, so there shouldn't be cause for concern. In fact it was close to where some Greenpeace protesters had damaged the pipe some years previously. Those dammed protestors, they really are threatening the safety of the nuclear industry. Oh - and the new motto from John Clarke, head of THORP and the Mister Burns of the Sellafield Complex- 'Sooner, Safer, Cheaper' You don't know whether to laugh or cry!
Posted by Ciarán at 3:36 pm No comments: 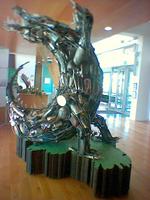 ...The monster in question being of course the sculpture in the front lobby of the Environmental Protection Agency's Headquarters in Wexford. It's by Bill Fallover and depicts a dragon like creature made entirely of waste materials that are bonded together to depict a animal rearing up over the island of Ireland. If you look carefully you can see the footsoldiers of the EPA struggling to control the creature with what look like rather ineffective strings. I suspect the beast is being driven into paroxyms of rage by the attempts to bring it under control.

Not a bad analogy for the work of the EPA in trying to get on top of the waste and other environmental problems that challenge Ireland.

Thanks to Mary Kelly the EPA's Director General who invited me down to Wexford to have a look at their work. It was impressive to see the range of research work that they're funding, but they have their hands full in trying to get the dragon onto its leash in the years ahead
Posted by Ciarán at 2:42 pm No comments: