As goes Killorglin, so goes the Nation? 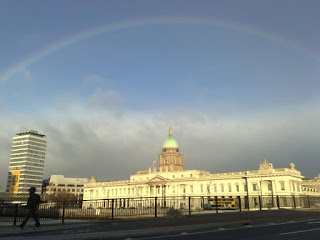 Had a decent discussion on Morning Ireland on Tuesday about the good news that councillors in Kerry decided to downzone land in Killorglin, and thus inject a touch more realism into their Development Plan.

In doing so they are anticipating the passage of the 2009 Planning Bill which is making its way through the Oireachtas.

I'll be discussing this as well as taking any general questions on the theme of 'proper planning' in a video-conference that I'll be hosting on Friday 26th May 2010 at 1pm. You can login at the link here and fire in any questions that come to mind. I'll be based in my office in Dun Laoghaire, but you can join me as long as you're connected to the interweb, somewhere.

Last night I spoke at the "Planning Our Retreat from Fossil Fuels: Exploring the Ramifications of Peak Oil" talk at Cultivate.Richard O'Rourke and David Korowicz painted fairly pessimistic pictures of Ireland's failure to tackle this challenge in a discussion moderated by John Gibbons. Without being a Pollyanna on the topic I pointed out that we coped with a massive reduction in energy during the Emergency seventy years ago, and that low-energy technology is evolving very rapidly. We still need to move much more rapidly to reduce our dependence on oil, and need to to move this debate centre-stage.

I'm writing this from the 720 train to Kilkenny from Heuston. I'm on my way to open the "Local Economies, Strong Communities" Conference in Kilkenny. Thanks to Mayor Malcolm Noonan for inviting me.

On Friday Cultivate is hosting the Convergence Festival Conference
Rethinking the City in the Greenhouse, Andrews Street, Dublin 2. There I'll be trying to answer the question "How do we transform our cities to be green, smart and resilient?"

On Friday evening there's a lecture by David Engwicht on the theme of "How to bring the Streets to Life" down in Dublin City Council's Wood Quay Venue. Apparently David likes plonking a chair down in the middle of the road and hold interviews while providing some automatic traffic calming at the same time. It all sounds intriguing!

All in all, lot's of discussion around the themes of sustainability this week, and I hope you can join me online this Friday at One to discuss the planning implications on www.irishdebate.com.

Posted by Ciarán at 2:18 pm No comments:

An update from Dún Laoghaire 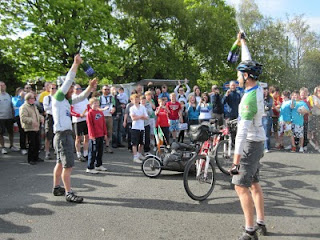 These guys have good reason to celebrate.

They're Simon Evans and Fearghal O'Nuallain, and for the last year and a half they've been peddling around the globe, and I joined them for the last lap on Saturday, from Blackrock College down to Greystones. There was around 150 of us on the ride, and it was all for a good cause, raising funds for Aware - a charity tackling depression. After a 30,000 km bike-ride they had good reason to break open the champagne, particularly as Bubble Brothers provided some sponsorship.

Meanwhile there's ructions in Sandycove at the moment. The Council proposes slicing of some green space at Newtownsmith to accomodate parking for nearby residents, but my worry is that this could be the thin end of the wedge, particularly as the Council always seems to be chomping at the bit to provide more parking around the town, even it involves reducing green space. I've suggested that with a bit of tweaking and reducing the width of the road, footpath and wall they could squeeze in car parking if they really feel the need. It begs the question as to how everyone has managed to cope without parking along the sea-front, but that's a question for another day.

Up on Georges Street in Dún Laoghaire, traffic is also causing problems. Despite the Green Party's best efforts, the councillors voted to allow all traffic back onto the main street in Dún Laoghaire. Not suprisingly this is causing lots of wear and tear to the ill-conceived choice of rough granite cobbles that were put down when the environmental improvements were carried out several years ago. Now the plan is to rip up the granite road surface during the month of June and put down asphalt, at a cost to the tax-payer of several hundred thousand euro. I'm annoyed that the Council chose dodgy cobbles in the firsts space, but I'm mad as hell that the councillors performed a U-turn on pedestrianisation. At least there'll be less people tripping up on the rough surface and that can only be a good thing.

The main streets of Dún Laoghaire have had a tough time trading over the last few years. There's a life cycle to every business, and sometimes the second generation that takes over a business don't make as much of a go at it as their predecessors. Dundrum, and the city centre have also attracted some customers away for the County Town. High house prices also deterred young families from moving to Dún Laoghaire during the 'Tiger' years and that has taken its toll on the demographics over the last decade. There is some good news though, the Council has appointed a Brand Manager to develop a marketing plan for the town, and a new evening arts and music programme is about to kick off on Thursday 20th May. I am told that a typical Thursday evening will begin with film screenings and live performances at 5pm in the Pavilion Theatre Gallery followed by 'artist talks' series at 6 pm at the Sunshine Café', on Georges Street. At 7pm in Weirs of Dún Laoghaire, the Damian Evans Mixed Ground Jazz Series will be running, offering attendees the opportunity to hear both local and international jazz artists in a fun and informal setting. Meanwhile, art projects and performances by Naomi Sex and Sinéad Mc Cann will be underway every Thursday evening (and at other days during the week) at the artists' studios on Lr. Georges' St. I'm sure it'll give a much-needed great boost to the town.

In other local news, the Council has announced that it is withdrawing from providing a waste collection service. I'm not suprised, given that under a Fine Gael/Labour ruling alliance it has run up debts of €30 million in unpaid charges over the last ten years. It doesn't help, mind you when some councillors are saying that no-one should pay their waste charges. I'm told that the Council will ensure that there will be a seamless transition period, and I've urged the County Manager Owen Keegan to make sure that no-one is left without a waste collection. I'm glad to see that they've put up the answers to some frequently asked questions here. I suspect the withdrawal of the Council from direct waste collection services may make it more difficult for the four Dublin Local Authorities to press ahead with their plans for the Poolbeg incinerator. You can get the lowdown on our waste management challenges here at the DublinWaste website, but be warned, it does come with a pro-incineration bias.

Finally, it's nice to have some warmer weather on the way, though Met Eireann are warning that there's a chance of potato blight. Hopefully my Orla potatoes will prove resistant, as we head towards the summer and a busy few weeks ahead in the Dáil.

One last thing - the Green Economy Expo is on in Croke Park this Friday and Saturday21-22 June 2010 , lots of good ideas and speakers discussing ways of creating environmental job opportunities, and you can find out more here.
Posted by Ciarán at 10:36 am No comments: 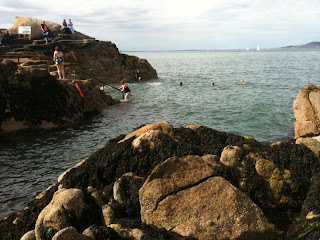 It was chilly enough in Sandycove yesterday. There were a few brave souls in the water, but I stuck to the rock-pooling.

The weather's been a bit like the economy, turning the corner, but not quite there yet. Still, I'm optimistic about the months ahead: we're due a decent Summer, and figures are indicating a recovery in the economy as well.

I'm writing this from the train, on my way back up from a meeting of Forás Orgánach in Co. Offaly. I've finally worked out how do this tethering thing between my laptop and an iphone.

The meeting was held at the Department of Finance offices, decentralised a few years ago to Tullamore. I'm not convinced of the merits of decentralisation, especially when it is linked to building offices in out-of-town locations. The building is located in an office park, and although it seemed well-built, there was only one bike visible in a sea of surface car-parking. You can't detach proper planning from building in the right location in the first instance, and while the building standards may be high, it doesn't seem right to place such buildings a mile out the road from the town, where people are more inclined to drive, rather than walk, cycle or use public transport. On the same issue I was glad to see Bertie Ahern having a re-think on decentralisation in yesterday's Sunday Tribune. I'd have thought that one of the first aspects of decentralisation should have been a state-of-the-art video-conferencing suite in every decentralised office, but I suspect that if they do exist they're not being used to full capacity. I can only imagine that mileage claims have increased as a result of Charlie McCreevy's flawed decision.

Still, the meeting went well, and we had a good discussion of the draft plan from the Forás Orgánach Partnership Market Development Group. In my contribution at the start of the meeting I mentioned a report from the United Nations Environment Programme on 'Organic Agriculture and Food Security in Africa'. The report suggests that organic farming can feed Africa, and all the cases studied showed increases in per hectare productivity of food crops, challenging the myth that organic agriculture cannot increase agricultural productivity. Meanwhile the European Union has a new organic logo that comes into force at the start of July. It depicts a leaf outlined by European stars and is accompanied by the words- "organic farming good for nature, good for you" and should increase awareness of organics within the European Union.

Meanwhile I'm launching William Campbell's new book on Thursday 13th May 2010. "Here's How" is both provocative and challenging - packed with ideas for how to transform Ireland to meet the challenges ahead. It concentrates on the need for reform at all levels on how the State operates and is a thumping good read.

The Green Economy is turning out to be a huge part of how we turn Ireland around. Green goods and services are estimated to be worth €2.8bn to the Irish economy every year and this figure is growing rapidly. We're helping to organise a conference on Friday and Saturday 21st and 22nd May 2010 in the Croke Park Exhibition Centre. A keynote speech will be given by Gabriel D'Arcy, CEO, Bord na Móna entitled "A New Contract With Nature – the Green Economy in Action." I'll be adding my tuppence ha'penny worth as well on the issues of agriculture and planning.

Details of the conference are on the www.GreenEconomy.ie website.