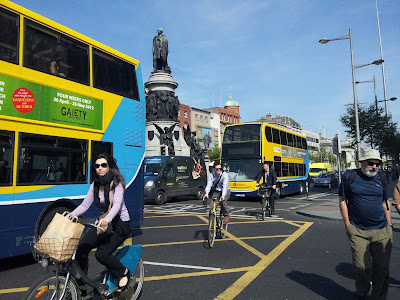 Had a good meeting with Mayor Andrew Montague and the team from the Dublin Fifth Province team this afternoon.

We were brainstorming on the issue of cycling, and how to build on the success of the Dublin Bikes, the Cycle to Work Scheme and other initiatives that have led to a rise in cycling in recent years.
Here's my own suggestions:

1. Provide traffic calming on the roads that encourage speeding. These are often one way streets that get wider as you travel down them. I'm thinking of Kildare Street as you travel towards Stephen's Green from Nassau Street, or the West side of Parnell Square as you head towards Dorset Street. This one's a pet hate of mine. You can stand and watch expectant mothers legging it across the 'Formula One' junction (thanks Andrew) at the top of Parnell Square near the Municipal Art Gallery to get out of the way of speeding car. Tighter curve radii, road narrowing and rumble strips can help slow down traffic, even tree planting can contribute to a sense of enclosure and help calm the traffic.

2. Provide child priority zones with good signs in residential neighbourhoods and near schools. Perhaps the 30 kph signs could have a logo of a child to remind car drivers of the vulnerability of young children to speeding.

4. Retrofit quality cycle routes beside canals, the coast and rivers. This means the Liffey Quays as well as alongside the Tolka, the Dodder and the Royal and Grand Canals. It's fascinating how the lane reductions on Wolfe Tone Quay after the floods hasn't led to the City grinding to a halt. My strong view is that we need to widen footpaths and provide a decent continuous cycle lane on both the North and South Quays.

5. Produce a 'We Love Cyclists' sticker for buildings used by the public.  Such a notice could make it clear that cyclists are welcome, and indicate where bike racks are located, and show the distance to Dublin Bike stations or nearby bike routes. As Andrew pointed out, there's always that slightly embarrassing moment when you enter a lobby and stop to remove you wet weather gear. You can't help but think that a security guard is about to hop on you, thinking that you're about to strip off. A welcoming sign would reassure you and might make others think about getting on their bike.

6. Provide contra-flow cycle lanes on one-way streets. I remember Carmencita Hederman arguing for this on the City Council twenty years ago with limited success. It took years to convince the Council to provide even the most minimalist stretches of contra-flow on North Brunswick Street. We need to have such lanes on roads like Merrion Row and Nassau Street. The new scheme on Newtown Avenue in Blackrock that I worked on  with Dun Laoghaire Rathdown County Manager Owen Keegan is now open and shows how successful it can be to put in the missing link in the chain.

7. Publicise the benefits of cycling. We need to promote cycling in the same way that cars are advertised on those J.C. Decaux advertising signs. It's an easy gig really - arrive on time, keep fit, meet your friends, save the planet, there's no shortage of reasons for cycling. Think about what some budding Mad Men (or Women) could do with the cycling brand.

8. Gradually reduce car parking. Apparently the City of Copenhagen reduced the amount of car parking over the last thirty years in a 'soft stick' approach to favouring the bike. Naturally this was done in tandem with improving cycling facilities. Currently over 35% of journeys  to work in that city are by bike, starting from a low base back in the 1970s, and that's in a city where the cycle lanes require a lot of snowplowing in the winter months.

9. Let the public decide on budgets for cycling. I suspect if people knew that cycling only get the crumbs of the transport cake when it comes to budgets than they'd ensure that cycling get its fair share. Personally I'd dedicate at least 20% of the City Council's transport staff time as well as capital and current transport budget to cycling initiatives. The reduced traffic congestion and improvement in public health should cover the cost.

10. Re-educate the professionals - Engineers, the Road Safety Authority and the Gardaí. OK, maybe we should call it Continuous Professional Development, but there is an information deficit, and in some cases resistance in certain professional quarters to recognising and promoting cycling. If the Gardaí put more effort into stopping cars speeding than deterring jay-walking the streets of Dublin would be much safer. The Road Safety Authority could concentrate more on ensuring that car drivers think about cyclists more often. For instance on the Continent some countries teach car drivers to open the driver's door with their 'gear stick' hand so that they instinctively check behind for cyclists before opening the door. Having cycled into car doors on more than one occasion it would be nice to think that more car drivers would look behind them before opening the door. I'd also like to see more Engineering schools offering CPD or Diplomas in cycle planning.

They were my thoughts on the issues. Others discussed providing for the needs of children on the road;  increasing the amount of women cyclists,  and reducing traffic speeds to limit deaths and injuries. We also touched on Shared Space issues and the work of Dutch Engineer Hans Monderman

The work that the Fifth Province is undertaking will hopefully lead to a safer more vibrant capital city, and I'm looking forward to the results of their research.

Finally, best wishes to Ciaran Fallon as he heads off to pastures new from his position as Dublin Cycling Officer over the last few years. Let's ensure that the position is filled soon, not watered down and that his successor achieves as much success in the post as he did.