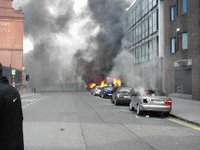 10:59:07 "… Willie Frazer has played down fears that the march will provoke violence, saying: 'The Gardaí are more than capable of policing parades… and if there’s trouble that’ll be up to the Gardaí to deal with, and they will deal with it, irrespective of who it comes from.'"

"…The organisers of the ‘Love ’ parade have cancelled the event following violent clashes on in ."

Was the March intended to contribute to a lasting peace in ? I doubt it. Echoes of the Dublin Bombings all over again in this pic of a car on fire on from Indymedia. Thankfully nothing that bad from what I’ve heard so far. Not much fun being in town with the kids, so without much information about what was going on we headed as far away from the action as possible. Shops were pulling their shutters down, and it was time to leave.

Report of chairs being thrown through the windows of the Progressive Democrats Headquarters on . Possibly the same chairs that Pat Rabbitte and Enda Kenny used for their phot-op at Dunne and Crescenzi a few months previously. Speaking of which, whatever happened to that Programme for Government that they were working on, or was it all froth from their cappuccinos?

Meanwhile I’m wondering how the Garda Reserve would have handled today’s disturbances. I’m sure some of the rank and file at work today would have appreciated some back-up.