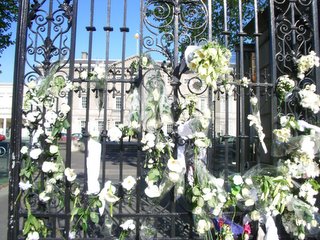 I never thought I'd be sitting in a room discussing sexual positions with Michael McDowell. Politics is a strange calling though, and along with Jim O'Keefe and Brendan Howlin and a clatter of advisors (all male) I found myself in a ministerial meeting room, not once but three times over the last few days. It all felt like a bad dream, and in the end we differed over the criminal penalties for sexually active fifteen year olds. Rushed legislation is bound to be flawed, and that's why I proposed a 'sunset' clause of two years for the Criminal Law (Sexual Offences) Bill 2006.

The crowds outside was angry but it feels a bit odd to have a state broadcaster egging them on. We TDs were damned if we showed our faces there and damned if we didn't. Someone said to me that there were very few of us there, but someone else was giving TDs a hard time for showing up. Curious having a PD candidate addressing the crowd when their own Minister had forseen stormy waters as long as ten years ago.

The devil is in the detail, and perhaps Part 5 of the Act is the most contentious. Stigmatising fifteen and sixteen year old boys for having sex, while saying to girls of the same age that they won't be criminalised for having penetrative sex, but will be for other kinds of sexual act must be one of the most bizarre pieces of legislation in recent years. It seems doesn't seem like the right kind of message that the Stay Safe Programme is teaching in schools, but even that is hard enough to get details on from the web.

Perhaps some sort of Romeo and Juliet clause that wouldn't criminalise 15 and 16 year old teenagers who have sex with persons less than two years older than themselves would have been a better way to go. The Green Party tabled various amendments, but even the seemingly uncontentious suggestion that the rights of the child should be a primary consideration was opposed by Government. Doubtless the Sunday papers will have a field day.

As a parent and citizen, I feel that the whole problem of child sex abuse and underage sex comes from our ambiguity about what and who is a child.

I would like it to be clear that a parent is responsible for a child from age 0 to 18 and that sex is not in the interest of childhood, it interferes with and puts a childs passage to adulthood in jeopardy. All parents should be guarding against and preventing children from having sex or being abused by another person.

But the law also needs to recognise that sex amongst children is not acceptable and sex with a child by an adult is criminal. Our ambiguity about when can a child consent to sex is harmful. While a child is in the care of adults consent to sex should not be an issue. Consent like voting should commence at 18, when a young adult can also accept responsibility for his/her actions.

I would like to see the law state clearly that it is a criminal act for an adult even a new adult of 19 to have sex with a child ie 0 to 18. The onus should be on the "adult" to know how old a child is. For an adult to say that he didnt know the sexual partner was underage is a sad reflection on that adults ability to form relationships. And where sex occurs between two children the matter should be referred to counsellors and medical personal and the children should be guided to recover from the encounter and to understand that underage sex is harmful to the growth and development of the body and of the ability to have relationships. The parents should receive additional training and or support dependng on the circumstances. In the case of children having sex, it should be established whether or not there was negligence on the part of the parents and if so they should be pensalised, this could mean being sent out to work while a more qualified Nanny takes over the parenting of the children but remains within the family home.

We are very ambigious about how much parenting a child needs. In my books a parent should be parenting fulltime until the child is 18. Sadly most parents nowadays are encouraged to return to the paid workforce when their children are quite young and if the children are 0 to 7 they will get creche care but once the children are about 10 there are no care facilities for them and they are left on the streets to fend for themselves - then they roam around in gangs and are open to drugs, vandalism, violence and sadly sex.

I believe that we made a terrible mistake encouraging mothers to go back into the paid workforce. What we should have done was recognise the " unpaid work" they were doing as valid, essential and worthy of a salary. By awarding them a salary, we would have recognised the work they do, raised the status of women and in a stroke of a brush we would have full "employment" of women in our country.

By providing a salary for childcare we would also open the possibility for Fathers to take up the career of parenting full time releasing many reluctant mothers up to follow careers of their choice. Where both parents want to work or lack parenting skills the salary could go to a fully qualified NANNY, thus always ensuring that children receive 24 hour care 7 days a week, 365 days a year and for the full 18 years of their profoundly important "childhood and passage to adulthood"

Around the world the issue of poverty amongst children is intimately bound up with the status of mothers. Where a mother has no earnings for her labour of rearing children she can become dependant on a violent partner or drop into terrible poverty if her spouse leaves to join a war effort. When we eventually, and we will some day, recognise and pay all mothers for the valuable "career" of child rearing, poverty will truely be history