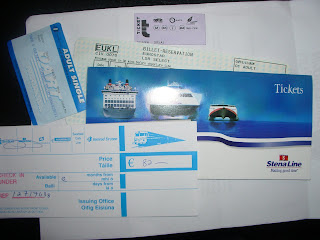 We'd been planning the trip for a while. On screen it looked easy, and we were dying to find out how it would actually pan out. The idea was to farm out the kids to friends and relations and head off on a low carbon long weekend to Paris. It would be nice to get away for a couple of days before the madness of the last two months of the campaign.

Well, we had a great time. The 11h10 sailings of the HSS Stena Sealink started up after the winter break on 1st March, and we were first in line. There had been gales for the few days before we set off, and the memory of trips on the mailboat twenty years ago kept coming back to haunt me - the smell of vomit, the sound of breaking glasses in the swell and the drunken slurred question "Are we near Holyhead?", before another wave sent more drinks crashing off the bar.

Everythink had changed. Even the €42 train and ferry ticket to London felt cheaper than it had been a generation previously. It was a sunny breezy morning as we stepped of the Dart, and into the bright terminal building. As we boarded someone from Welsh Tourism handed us daffodils and a small red stuffed dragon, a nice touch. Twenty minutes later we rounded the East Pier lighthouse, and Ireland was soon a blurred line on the distant horizon. There was only a faint swell once we were out at Sea, and the Welsh hills soon appeared. Our Virgin Pendolino high-speed tilting train was delayed, but a local train brought us to Llandudno, and after an hour's wait in the sunshine trying to decipher no smoking billboards in welsh we were on our way. Soon we sped through Chester and Crewe, before upping our speed down to London, Euston. Without Oyster cards we had to fork over£4 each for a fifteen minute tube ride south to Waterloo, next time we'll be better prepared.

After a two minute baggage inspection we boarded the 19h43 Eurostar on time, and at £29.50 for a one-way ticket it felt like a bargain. We had a quick coffee in the waiting area cafe, and as we boarded someone checked our meal reservations, and brought us to our seats. We had splashed out by pre-ordering a meal on board, and as soon as the train pulled out from Waterloo, the waiter appeared, offering us a glass of champagne to set us on our way. An announcement as we tucked into our main course gently informed us that we were about to enter the Channel tunnel, and our ears popped as we entered and exited from under the sea twenty minutes later. We pulled into Paris Gare de Nord at 23h30 (22h30 Irish time) and after a taxi trip past the Paris Opera and through the Place de la Concorde we crossed the Seine and checked into our hotel and gazed at the lights on the Eiffel Tower at midnight. Truly, the most stress-free foreign trip that I've had in years.

The way back was a different story. We had a great night in London, but there was no ferry that would take foot passangers from either Holyhead from Liverpool or Holyhead connecting with Sunday trains. Only cars were allowed. Sustainability how are you! We joined the masses at Gatwick and queued for 45 minutes for security, with staff telling you to walk faster and removing bottles of water prior to the security check. I'm not totally convinced that high-speed trains or ferries are as light on the planet as we might allow ourselves to believe, but Eurostar certainly think that their service only generates one tenth the emissions of travel by air. Next time I'll do my best to let the train take the strain, both there, and back. You can have a look at our journey to Paris on that Youtube thingy. By the way, it was herself who went for the vegetarian option, before eagle-eyed observers inspect my dinner too closely!
Posted by Ciarán at 5:26 pm

Nice post Ciaran and inspiration for my own planned slow travel trip to the south of France later in the year.

There's still a bit to go before the non-air option becomes easy - last year I had to buy a return ticket on the Eurostar to Paris because it worked out cheaper than a single at the time! Stone age stuff. But even so, the eurostar and the TGV are so much more pleasant than planes.

I'm going through the difficult process of trying to get to Prague by rail. It's proving a little trickier to do without an overnight in London, which would jack up costs.

Michael,
Mark Smith's website www.seat61.com is a great resource for planning your journey, however I'd imagine that it would be difficult to get from Dublin to Paris / Brussels and then on to a sleeper train on the same day.

Good God Ciaran,
This sounds like madness.
How long was your weekend trip?
What percentage of it was spent "Slow Travelling"?
How much of your time did you spend making your PR video?
Did you not drive your other half completely nuts?

Reducing our individual carbon emissions is of course admirable and desirable, but what about life, balance and perspective?
It would be wonderful seeing 'high mileage' air travellers seeking to reduce their resultant emissions, but for the rest of us who take one or two flights per year, this is nonsense.
Life is about juggling conflicting goals and limitations: Time, Environmental Impact, Cost, Convenience, etc. Not about dropping all of the balls except the same old headline "Carbon Footprint" one. Juggling with one ball isn't too difficult.

Indeed Paul, we wouldn't want enviromentally-based ethics to get in the way of day-to-day life. God forbid!

Anyway, before I had even thought of "carbon footprints", I decided to get the train to Prague. It seemes a little grander, and somewhat more romantic (which is a large part of the trip).

The journey was actually great fun compared to the Ryanair experience, and was part of the holiday.

Oh, and yes the other half is still talking to me, justabout!

Righto! That's fully planned so. Same way you got to Paris, but then onto Cologne and then to Prague.