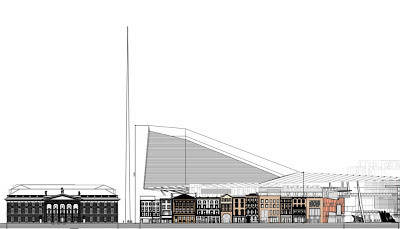 Not for the houses that the leaders of 1916 occupied in their last stand after leaving in the GPO, but for the vibrancy of the economic activity that immigrant and Irish retailers and visitors bring to the area, and the wealth of the existing built fabric and heritage that is threatened by demolition.

The phone shops; the vegetable stalls; the French Bakery and FX Buckleys the butchers. For many a stall or a small shop on Moore Street is a step on the first rung of the economic ladder. It all gives  a buzz that doesn't deserve to be eliminated by the Celtic Tiger 'Dublin Central' project. It would be the ultimate irony if tax-payers money were to be used through NAMA to give this destructive project a new lease of life. The drawing of the scheme shows the profile of the project set against the existing O'Connell Street looking west. It is over-scaled and represents a dated approach to revitalising an area.  Perhaps the most bizarre part of the whole proposal promoted by developer Joe O'Reilly and designed by architects  BKD, McGarry Ní Eanaigh and Donnelly Turpin is the north-facing park proposed for the roof of the shopping centre. It is all just plain wrong in its shape and size. It is grossly over-scaled for the area, and involves the demolition of too many buildings.

It reminds me of the Skidmore Owings Merill proposal for a central bus station in Temple Bar from the early 1980s that would have demolished dozens of buildings on both sides of the River Liffey and replaced what was then a bohemian quarter with, well, buses. The Dublin Central project seeks to replace a vibrant quarter with, well, British High Street shops.

When you walk along Moore Street there is a lot of under-maintained buildings, but that's mostly due to the urban blight forced on the area by developers. If the cement blocks were removed from the windows of the upper floors of these buildings they could be refurbished to become artists' studios or living spaces that would increase the footfall and life of the area. Many of these buildings date from the mid-nineteenth century. Some look even earlier.

Dublin City Council needs to take enforcement action against the unauthorised surface car parks that have been springing up off Parnell Street. It also needs to reconsider the support it is giving  for comprehensive redevelopment that failed in the 1960s, and that is set to fail again if it continues to facilitate a deeply-flawed redevelopment proposal. If there is a building to be demolished in the area, it is the City Council's  own cleansing deport which an architectural travesty with a blank ground floor facade covered in advertising at the corner of Moore Street and O'Rahilly Parade. Perhaps it could be replaced with a decent indoor market that could give budding entrepreneurs an affordable stall and a roof over their head to sell their wares.

Last Autumn my students in the Spatial Planning degree programme carried out a conservation inventory of the buildings in the blocks bounded by Upper O'Connell Street, Parnell Street, Moore Street and Henry Street. They showed that there is  a wealth of heritage and economic activity in the area that deserves to be protected.

Moore Street has a long and fascinating history. Barry Kennerk's new Book "Moore Street the Story of Dublin's Market District" is a great read that documents the history of the area through the eyes and words of traders and local residents. Street trading has deteriorated in recent years. That's partly due to the lure of supermarkets and shopping centres, but it's also due to the neglect of the street by the city council. It has not just turned a blind eye to the creeping dereliction fostered by developers, it has encouraged speculators in their plans.

The area  deserves a decent future. Retaining and refurbishing 16 Moore Street and the adjacent buildings could be the first step in  what needs to happen. The link to 1916 needs to be cherished and celebrated as we approach the hundredth anniversary of the 1916 Rising. However I'm not convinced that another museum is required. Maybe a 'Living Over the Shop' project would make more sense. Minister Jimmy Deenihan is the decision-maker on this one. A Committee of Dublin City Councillors recently called for the 1916 buildings at 14-17 Moore Street to be retained, but they need to go further.  The entire neighbourhood needs to be refurbished rather than demolished to facilitate another Shopping Centre. Comprehensive redevelopment is not the solution to regenerating this part of the City. Maybe an architectural competition could be held to come up a carefully considered master-plan for the area.

Thirty years ago in Berlin they coined the idea of 'soft' urban renewal in Berlin. Essentially it means refurbishing old buildings in co-operation with the local community, and filling empty sites with well-designed, but not over-scaled buildings. Moore Street could have the buzz of Camden market and a thriving residential community. All it needs is a bit of imagination, and a change of direction from the City Council.

Soft urban renewal is what we need.

I absolutely agree - and am a supporter of the 'Save Moore Street' cqmpaign. Most of the terrace 10 to 25 predates rhe Famine.

apart from that, look at the building facing the mouth of Henry Place (55?) It is a building of great character with a delightful little dragon on the apex of the gable at the front and other intruiging faces on the front. This building is also due for demolition by Chartered Lands, the same company who want to knock down so much else in the area.

I absolutely agree - and am a supporter of the 'Save Moore Street' cqmpaign. Most of the terrace 10 to 25 predates rhe Famine.

apart from that, look at the building facing the mouth of Henry Place (55?) It is a building of great character with a delightful little dragon on the apex of the gable at the front and other intruiging faces on the front. This building is also due for demolition by Chartered Lands, the same company who want to knock down so much else in the area.

The thing that all of the people who have been trying to save Moore st from demolition since the 1990s do not understand is.... every politician from Enda kenny, Michael martin,President Higgins, Gerry Adams to name but a few have taken a tour of the historic quarter, agreed that it was an area of significance ,Kenny Called it "the Lane ways of History", yet Joe O Reilly a developer who was named as a golden circle member, is one of the maple 10 ,is bankrupt to the tune of over 2 bn ,is calling the shots. ...THIS IS WRONG ....something stinks in Moore st and its not the fish