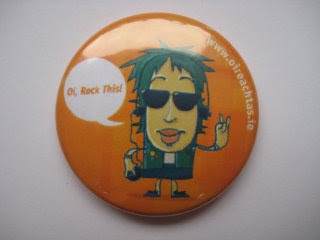 Ouch! Well it beats all the Cannon puns, almost...

The scene, Loreto Abbey Secondary School in Dalkey on a bitterly cold morning with a gale sweeping in from the north east, and waves crashing on the shore. Senator Larry Butler at the podium addressing a classroom full of transition year girls.

"Politics is not a sexy subject" he announces. It brought the house down. It's hard to be the guinea pigs, but there we were, Barry Andrews, Senator Eugene Regan, and Cllr. Dennis O'Callaghan, Cathaoirleach of Dún Laoghaire Rathdown County Council trying to explain what we do and why we do it.

It's all part of the Oireachtas Education Pilot Project, and with our Houses of the Oireachtas Schools Resource Packs in hand we took it in turn to describe our work. The packs feature postcards, button badges and a pull-out spread reminiscent of 'Lost' featuring a group of bewildered citizens stranded on a beach. The text reads:

"You are shipwrecked on a desert island. You are the only people on the island and it's unlikely that you are going to be rescued for some time. Please think about what type of laws you will need to ensure that everyone gets on, that everyone is treated fairly and everyone is safe.
Law to ensure fairness; law to protect people's rights, Law to keep people safe; law about offending people."

Mercifully we didn't have to give our answers to the above. Referencing Lord of the Flies was not an option! Apparently John O'Donoghue TD the Ceann Comhairle is behind all this, and it doesn't stop there. The Annual Programme of Public Events has been revealed. Sunday 29th June is Oireachtas Open Day with a Target Group of Families, and from Monday 6th to Saturday 11th October we're having The Oireachtas Festival of Politics - Target Group - Broad Public. The literature states:

"The Family Day should utilise both internal and external facilities. Externally, a ‘wow factor’ attraction, such as a hot air balloon that would reference the original recreational activities at Leinster House, is proposed. Internally, guided access to the floor of the Dáil Chamber provides that sense of rare access and thus, privilege."

Gift Grub, eat your heart out. And if that wasn't enough, here's the line-up for the Festival

"The programme will consist of events that connect the Houses of the Oireachtas and its Members to a broad range of issues and via these topics to an even broader public audience. Added to this will be an array of high profile commentators, former Members of the Oireachtas, international guests and media personalities, all of whom will be chosen on the basis that they will add popular appeal to this major exercise in promoting public interest in Irish politics."

In fairness, I think it's a great idea, and it follows from experience in other countries, but no doubt we'll have the pants slagged off of us.

Meanwhile back in Loreto one of the girls asked us for our funniest moments in public life. I gave a bit of a damp squib of an example from my first few months in the Dáil when I was in a flight of rhetoric denouncing Michael McDowell over the shortcomings of a Justice Bill when all of a sudden Deputy Jim O'Keefe turns around and stage whispers "wrong bill" which stopped me dead in my tracks. Barry Andrews gave a long and complex story about sending a budgie back to its owner that had flown into his office. He was having a busy day, and had to hail a taxi on Kildare Street and send the bird off in a box, unaccompanied back to a pet shop.

Senator Eugene Regan's story was the best. During last Summer's campaign he was feeling queasy after a long day's canvassing, and after being on the receiving end of a long rant at a doorstep he said to the constituent that if he didn't stop talking he would have to vomit. Needless to say the prospective voter kept talking and Eugen turned around and puked into the flower-bed. Eugene felt he got three sympathy number ones, but if anyone had the other side of the story, I'd love to hear it.

UPDATE
Eugene pointed out that the constituent was very pleasant, did not rant, and gratefully accepted a potted plant as a gift the next day. Apologies, Senator!
Posted by Ciarán at 3:18 pm

Ciarán
Born in Shankill, County Dublin, as the snow melted after the long hard winter of 1963. I trained as an architect and planner and studied at University College Dublin, the University of Venice and the London School of Economics. In the Dáil as Minister of State for Planning, I reformed our laws to put the needs of communities ahead of developers. I published laws to tackle climate change and noise pollution, and protect our heritage. I have stood up corrupt rezoning. I am a keen gardener and sailor, and have two children. I am currently a city councillor representing Dublin's North Inner City. I lecture in urban regeneration at the School of Transport Engineering, Environment and Planning at the Technical University of Dublin (former DIT), Bolton Street. I'm the Green Party MEP for Dublin.