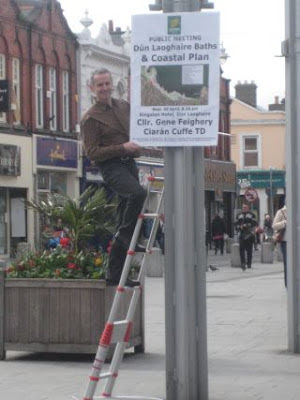 30th April, Kingston Hotel in Dún Laoghaire at 8.30pm. Cllr. Gene Feighery and Coastwatch Ireland will give their views, and I'll be racing out from a Dáil vote in Leinster House to catch the second part of the meeting.

I'm hoping that we'll pass a motion along these lines:

"That development proposals be prepared for the Dun Laoghaire Baths site along the following lines:

* Provide a publicly owned swimming amenity fully accessible to the general public,
* Provide a new building of no more than 2/3 storeys, in total, containing an indoor heated 25m pool,
* Provide a small number of related amenity elements including, for example, a toddlers’ pool, sea-weed baths, gym and modest café/restaurant with viewing area,
* Provide other appropriate cultural facilities in keeping with character of the town of Dun Laoghaire
* Renovate and re-landscape the existing walk-ways and maritime gardens between the Baths and East Pier in an environmentally sustainable manner and without any interference with the existing coastline beyond that absolutely necessary for the protection of the leisure amenity,
And that the Manager prepare funding options for the proposal, and provide bimonthly updates to the Council on the issue."

Seems familiar? It's what the Green Party Councillors proposed at the County Council Meeting on 10th October 2005. Sadly on that occasion we were voted down. Who knows where this one will end up...
Posted by Ciarán at 6:37 pm